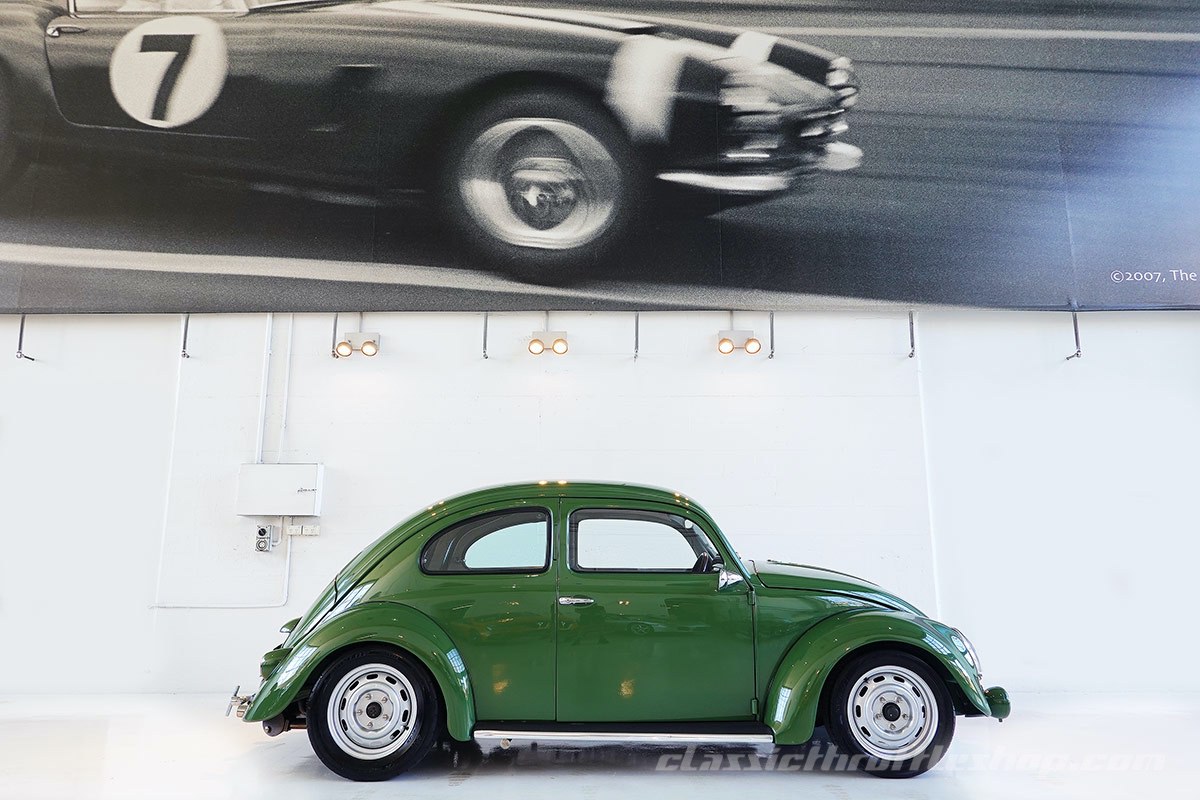 One of the worlds most recognised and longest running automotive designs, the Volkswagen Beetle was commissioned in the 1930's as the "people's car" (or volks wagen in German). Designed by Ferdinand Porsche, the curvy car was affordable, practical and reliable.

Automobiles of the 1940's and 50's around the globe were huge and trimmed to the teeth in chrome. Whilst most looked like spaceships and were stunning to look at, they cost a small fortune to own and maintain. Enter the Volkswagen Beetle. The brief was simple, be able to seat 2 adults and 2 children, with room for their luggage and the ability to cruise at 100km/h on the all-new Autobahn.

The Beetle was basic, as was its powerplant: a simple, in-expensive and robust small capacity air-cooled flat-four layout designed by Porsche himself, able to withstand the coldest of climates of Germany without cooling systems freezing. The design was too – just 18 bolts attached to the nearly flat chassis and sporting an “Oval” rear screen that has become iconic throughout the world.

By the 1960’s, the Beetle had improved immensely, all models featured modern integrated lights, increased engine outputs using better carburetion and compression ratio’s as well as fully synchromesh gearboxes, grab handles, fuel tank and better luggage capacity. Sales in the largest market, the US were booming, and deliveries were in the hundreds of thousands occupying driveways in almost every household as the reliable, budget car for the masses.

Accessible to a younger audience, a group of Californian car enthusiasts started experimenting with modifying and tuning the humble little “bug” into something of a hot-rod and created a cult following that is now recognised the world over. Founding the “Der kleiner Panzers” in 1965, this small group of aficionados from Orange County initiated “California-Look” and the dye was cast.

What distinguished the typical “Cal-Look” exactly? Quite simple: Take a Type 1 Beetle and leave out everything that is not absolutely necessary. Out with bumpers, rear seats, spare wheels, trim strips, steel rims. A certain purism combined with clever performance tuning. In order to make the most of the horsepower from a rear-engine of the Beetle, a tuned engine with maximum horsepower can be installed and finished “nose-down” appearance. Their motto was: Minimum weight with maximum performance. And with as much style as possible.

Available here is a simply stunning expression of the Cal-Look Beetle, created faithfully to the design requirements of the Der kleiner Panzer’s playbook. Built on an Australian delivered 1956 Type 1 and finished in Porsche Olive Grun, the “Green Machine” is running a 1969 independent rear suspension pan and powered by a US built 2.3 litre flat-four with a nitride crankshaft, forged pistons, Italian Webers and Cima cylinders producing just shy of 100kW and 170Nm or torque.

In 2006, a full restoration to Cal-Look specification was undertaken over a 12-month period with exacting detail. The back to bare metal body was painted in the very cool Porsche Olive Green, the pan perfectly powder-coated and IRS suspension completely rebuilt including Kmac rear sway bar. With a 5x130 wheel conversion with front drilled disks and Type 4 rear drums and sitting on sitting Lemmerz & bespoke engine mounts, the engine was moved 2” forward for better weight distribution makes this custom perform like a Porsche and handle like a go-kart.

In long term ownership for the past two decades with engineering certification and compliance for the road is 2011, this amazing rocket is ready to enjoy. Whether cruising to your fav classic coffee and cars meet up, displaying at the VW nationals or just a weekend away – your Cal-Look cred will be well revered.
Click to access the login or register cheese
Back
Send this to a friend