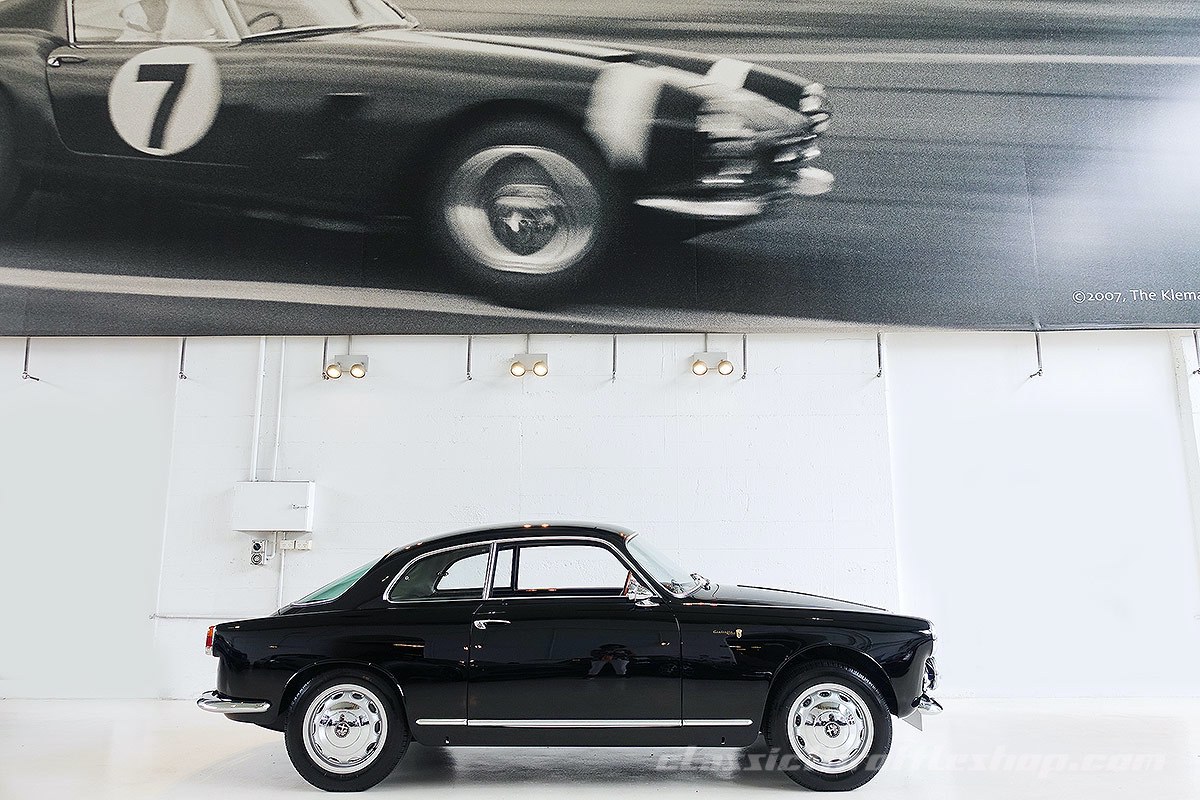 When a Blue Giulietta Sprint prototype was launched in April of 1954 at the Turin Motor Show, Alfa Romeo had no idea of the demand the brilliant GT would garner, and after a few days orders had to be suspended.

Featuring a spritely 1.3 litre all alloy version of Alfa’s classic twin-cam four designed by Ferrari engineer Giuseppe Busso, superb chassis control (it’s here the Alfa really excels), and of course the eye-catching Bertone body with masterful build quality, it’s no wonder this sportster was a smash hit then as it is today.

A numbers matching car privately imported to Australia in 2005, this 1957 Alfa Romeo Giulietta Sprint Coupe was comprehensively restored by specialists to an exacting original standard over an 8 year period in order to compete in the Mille Miglia Historic Road Race, Italy but it never eventuated.

This superb car is a very early and hard to find First Series Giulietta Sprint that features the 4 speed column shift transmission. Only a small proportion of original production remains in existence and in Australia, these are an exceedingly rare sight.

The early history of this car is confirmed by Archivio Alfa Romeo, Italy:

It is understood that not long after delivery to Switzerland the car was shipped to Wisconsin, USA under long-term ownership. There it remained until arriving in Australia.

The restoration covered every aspect of the car. With a lot of careful research, suitable parts were sourced from Europe and the USA.

The engine and gearbox were rebuilt with new pistons and a camshaft, with the practical addition of an alternator encased within a generator housing for originality as well as a thermostatic fan as well the car is well-suited to Australian conditions.

The suspension and brakes were also fully refurbished and the five alloy wheels were shod in period Correct Pirelli Cinturato 155HR15 tyres.

The bodywork is finished in its correct black paintwork with an exemplary depth of finish and the interior received the same pragmatic attention to detail as the mechanicals and bodywork, trimmed in stunning period correct Melrose Lunar leather.

Finally, a set of period correct Marchal spotlights were imported and fitted to the front grille, neatly completing the sporting style of the car.

Since the restoration, the car has travelled approximately 7,000km of which 4,000km were in the first three months, being the engine run-in distance at various rpms.

Twist the key and light the fire of the all-aluminum engine, every drive of this exceptionally well restored and collectable car is an event. Idle sets in at 1,200rpm and the busy, mechanical whirring of the camshafts dominate the soundtrack but it’s the sharp handling that make it a joy to drive.

An extensive history file is provided with the car, including many invoices, technical information, import documents and historic information too as well as an owner’s manual.

Since completion the Giulietta has been exhibited at events such as the Celebration of the Motorcar (by invitation) and The All Italian Car Day.

An incredibly desirable car, not just for rarity but the overall quality of its restoration, attention to detail and driving character this Giulietta Sprint Coupé would impress the most critical Alfisti. This is a classic to own, drive and invest in.
Click to access the login or register cheese
Back
Send this to a friend