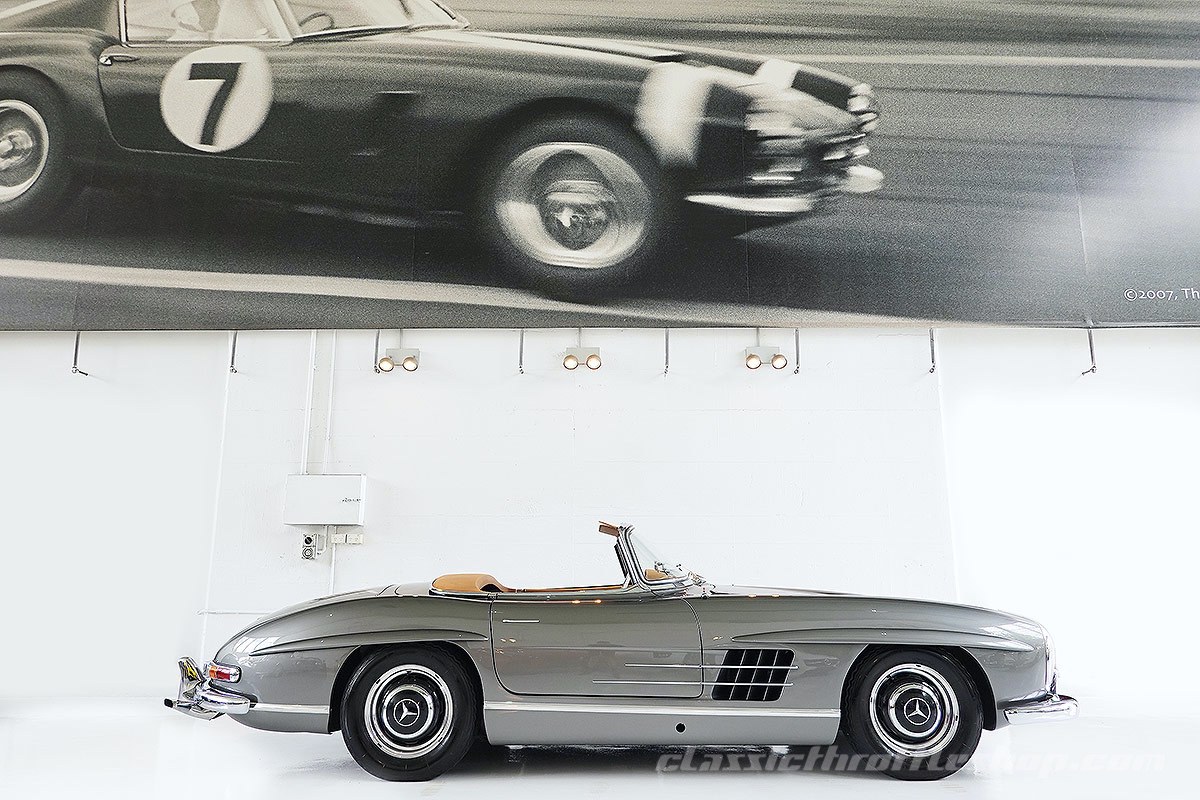 Based on the 1952 sportscar racer, the W194 which was also the first Benz to bear the SL badge, the 300 SL Roadster was the new model introduced by Mercedes at the 1957 Geneva Motor Show. The new version of the celebrated 300 SL Gulwing (chassis code W198) wearing open coachwork was capable of speeds over 260 km/h which made it not only the fastest production car of the time, but a very successful sportscar racing champion.

Short for Super-light, Mercedes' first use of the designation referring to the car's racing-bred light tubular-frame construction. Beautifully crafted over the tubular frame was a streamlined steel body with aluminium doors, engine lid, boot lid and lower side seals.

Taken straight out of the W194 sportscar racer, the 3 litre straight six powerplant had 2 enlarged valves per cylinder and replaced the triple Solex Carburettors with Bosch’s super-strong mechanical fuel injection form the dominating WWII Messerschmiitt fighter plane. This setup created the horsepower output of 240hp and with the engine tilted 50 degrees towards the driver’s side plus a dry sump set-up, the motor was able to be placed quite low in the spaceframe.

The interior is sleek and simple with leather being the standard option in the Roadsters. Most where spec’d with this and would be matched to the custom fitted leather suitcases.

To start the new year off, we are very proud to present a very special opportunity. Available to the collectors of the world is this early build European specified 300SL Roadster. Finished in Mercedes Benz’s factory Anthracite Grey for the W198s and factory coloured Tan leather, this 300 SL comes from a very experienced owner having already owned another roadster and Gulwing in the past.

Using his connections in the W198 community, he sourced this roadster in 2016 from the USA as a tired car with good bones and history. In 2017, the car went to his good friend and super experienced 300 SL restorer Mark Passarelli of Rancho Merced in Salida, Colorado. The motor along with all the mechanical were removed, restored and correctly fitted. After completion in 2019, he finally brought his 3rd 300 SL to Australia where the restoration was continued. The body was removed, stripped and repainted to an exceptional level by a master fabricator and ex-coach builder on the border of Victoria and New South Wales.

Once complete, Mark Passarelli came out to Australia to re-assemble the car correctly and finish every detail, ensuring the SL runs like a swiss watch.

Winning the Sydney Harbour Concourse d’ Elegance 2021 “ Best of Class, Runner up in overall Concourse and Overall favourite award, this concludes the story which along with all the paperwork, should be made into a novel. Full with lots of photos and receipts from current to past owners and their efforts put into this beautiful machine, this makes for the right provenance for a classic of this level. Original manuals, 30 year old appraisals and past certificates of title all continue the wonderful story of the example. Even a copy of the data card showing original factory options and the word ’Standwagen’ which means display car or factory use, are in the file.

When placed in front of you, you become infatuated by this incredibly gorgeous machine. Hypnotised by the design and engineering masterpiece. Rich with history on and off the track, the W198 300SL Roadster is an opportunity which should not be passed by.

As you squeeze the throttle and hear the strong roar of the 3 litre, you can imagine back to 1955 in the hills of northern Italy and what Sir Stirling Moss was feeling as he raced to victory.
Click to access the login or register cheese
Back
Send this to a friend