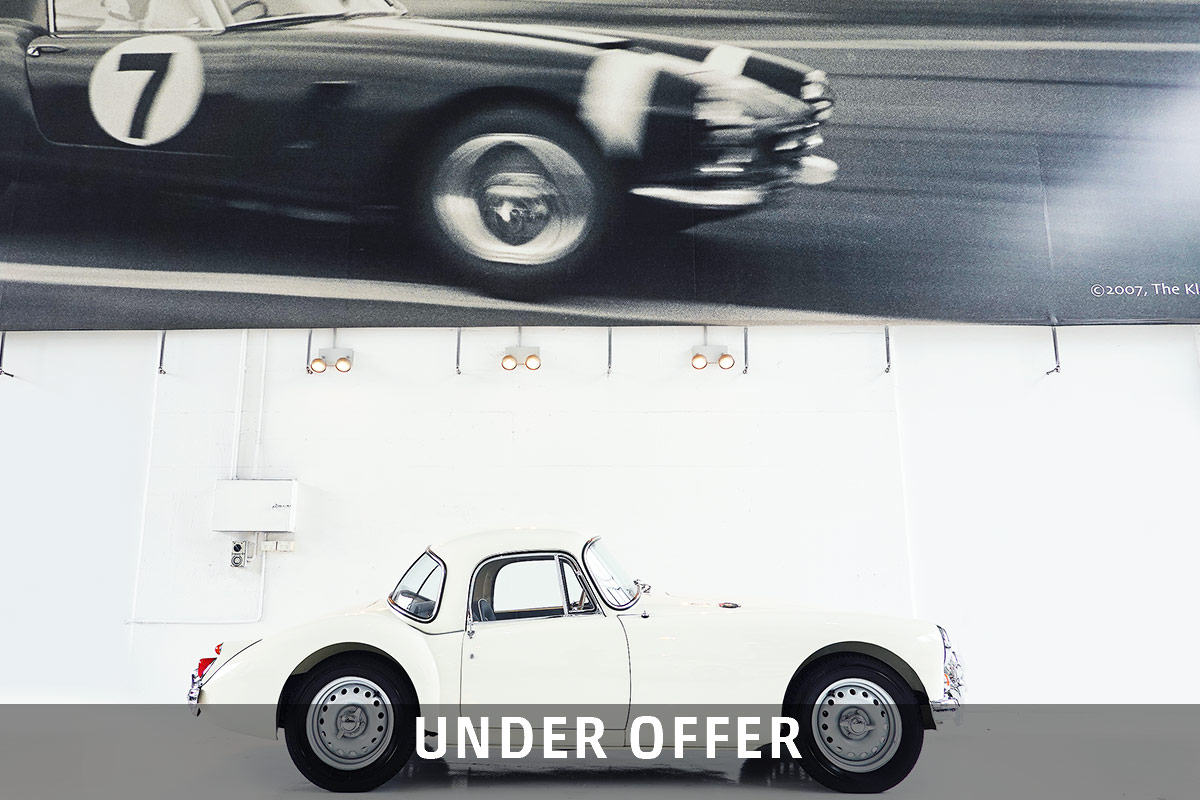 Replacing the outgoing MG T-Series and representing a whole new styling era for MG Sports cars the MG A was THE car that brought a new generation of enthusiasts to the marque.

It was a thoroughly modern sports car featuring an all new beautifully streamlined body and fitted with a 1,500cc robust B-series engine.

It wasn’t until 1958, a design engineer at the Cowley plant named Gerald Palmer set the wheels in motion for a twin-cam conversion.

The B-series engine block was bored out to a capacity of 1,588cc and fitted on top was a special lightweight aluminium cross-flow cylinder head carrying twin-overhead camshafts. Two aluminium cam covers adorned the top of the cylinder head and carburation was by twin-SU’s.

With these components combined, the all new Twin-Cam unit provided the MG A with a 108 horsepower and a top speed of 110 miles per hour which was considerably faster than the standard model.

To cope with the increased performance, Dunlop disc brakes were fitted all round as well as Dunlop centre-lock wheels, similar to the Jaguar D-Type.

One of the shortest production runs MG had seen, these Twin-Cam’s are extremely rare being built for just two years.

2,111 units were produced and only a handful of cars made it to Australian shores. This was due to the expense of importation as they were never built in CKD form and only exported in Complete Built Up form meaning import taxes were significantly more expensive.

We are very excited to bring to market this Australian delivered 1959 MG A Twin-Cam, built in September of 1959 and presented today in its original Old English White over black leather trim.

Its most recent owner is a experienced collector of specialty British sports cars and had it taken to a well-known specialist and meticulously restored to its original combination in 2019.

Experiencing a full body off restoration, every aspect was examined and restored to its original specification resulting in a masterpiece of a sportscar and a gold award at the latest show for the "Thoroughbred sports car club".

Accompanying the sale of this car is the BMC Heritage Trust Certificate, original MG A workshop manuals, paperwork documenting works, a series of photograph’s taken while the car was being restored.

An incredibly rare find, this MG A Twin Cam is a highly prized collectable classic today, and in this sort of condition with excellent provenance offers an opportunity not to be missed.
Click to access the login or register cheese
Back
Send this to a friend