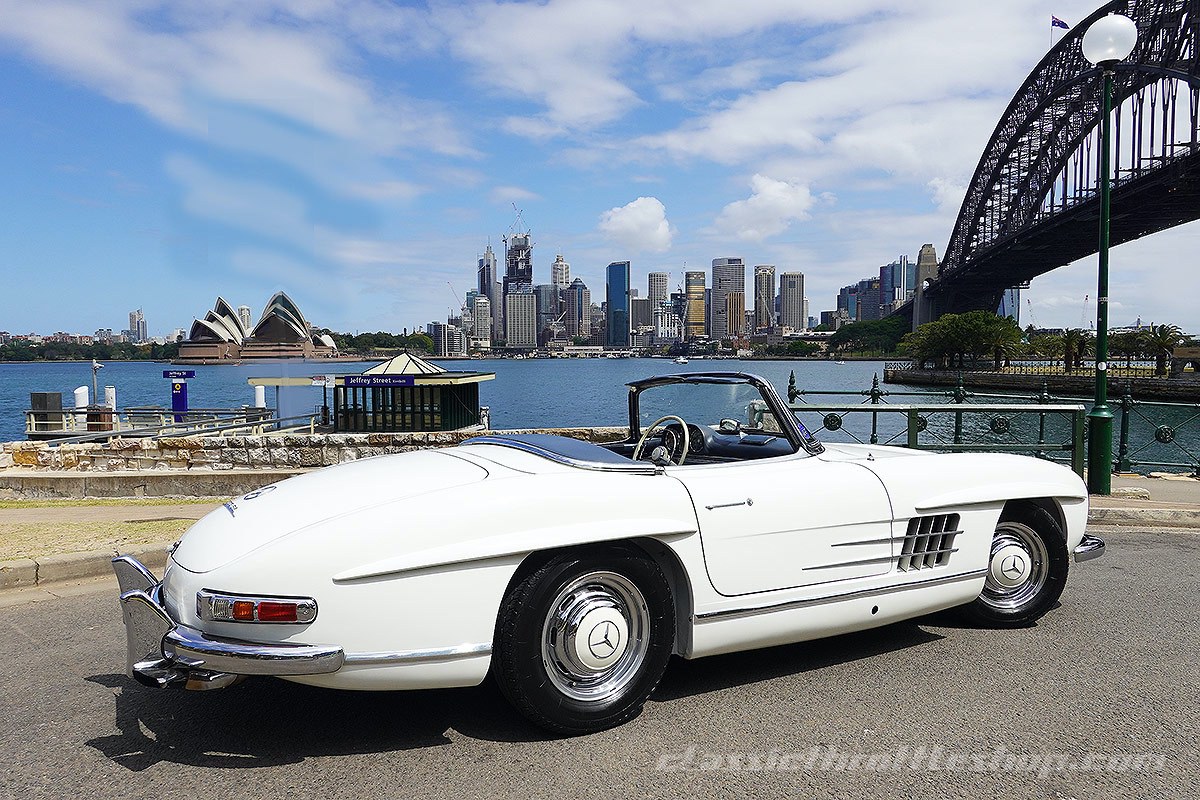 This fabulous Mercedes Benz 300 SL Roadster was delivered new on the 27th December 1960 to Erich W. Spitzner of Berlin.

Ordered in factory colour code of 717 Papyrus White with blue leather trim (333) and a Marine Blue soft top (896) with the optional and very expensive factory Hardtop painted to match the body colour.

Mr. Spitzner was the owner of a large knitting company based in Berlin and the car was a present to himself for Christmas 1960. The car was used sparingly by Eric over the next twenty five years with trips through Europe and to the Islands off the coast of Germany the most famous of these being Sylt. In fact the car was serviced once on the island at the local Mercedes dealership there on 1.7.65.

In 1985 with Eric getting older and using the car less it was put into specialised dry storage in Berlin, where it remained for the next fourteen years.

Erich passed away in 1997 and his wife then reached out in 1999 to Mercedes-Benz specialists HK Engineering in Bavaria for them to collect the car and prepare it for sale.

The car was removed from specialised storage in 1999 by HK engineering showing a total of 30,449 kms and was found to be in excellent preserved condition.

The car was prepared by HK Engineering and sold to a collector in Madrid, Spain who bought it for its superb originality and low kms. He barely used it and only covered 1,500 kms over the next 3 years.

In 2002 the car returned to HK Engineering who commenced a mechanical overhaul of the car for its next owner, Boris Bosch of Stuttgart.

This included an engine rebuild and fuel pump overhaul as he intended to drive the car frequently. All the works done by HK Engineering are in the history file confirming the works done with mileage recorded at just over 32,000 kms when it arrived back from Madrid.

Mr. Bosch would use the car for the next three years covering nearly 18,000 kms, clearly he loved driving his magnificent 300 SL! with HK looking after the car for regular servicing and maintenance again with the accompanying bills over the period.

In 2005 the car returned back to HK engineering for sale and was advertised by them showing 50,065 kms.

The car was purchased by him in 2005 and duly arrived in Sydney on the 16th October that year.

Greg and son Will Sanderson used the car over the next thirteen years, maintaining the car through their Mercedes dealership with no expense spared.

Purchased in late in 2017 by CTS founders Rory and Karin Johnston, the 300 SL having been a lifetime goal for Karin, being a Stuttgart girl and having amassed over 400 models of a 300 SL!!! Yes its true, she really is a car nut!

Having enjoyed the car over the past three years and covering some 8,000 kms this truly stunning car is ready for its next custodian.

The car has a wonderful history file with all its original books, including its original service book, Becker Mexico radio booklet and certificate, its original factory tool kit and jack as well as its original Mercedes-Benz data card confirming all the numbers of the car, that of course are all still matching as per the day it was built sixty years ago.

Having owned many great classic cars over the years of trading this 300 SL will always be remembered as being a standout example.

It’s fast, it sounds amazing, it looks amazing and…. it is amazing!
Click to access the login or register cheese
Back
Send this to a friend