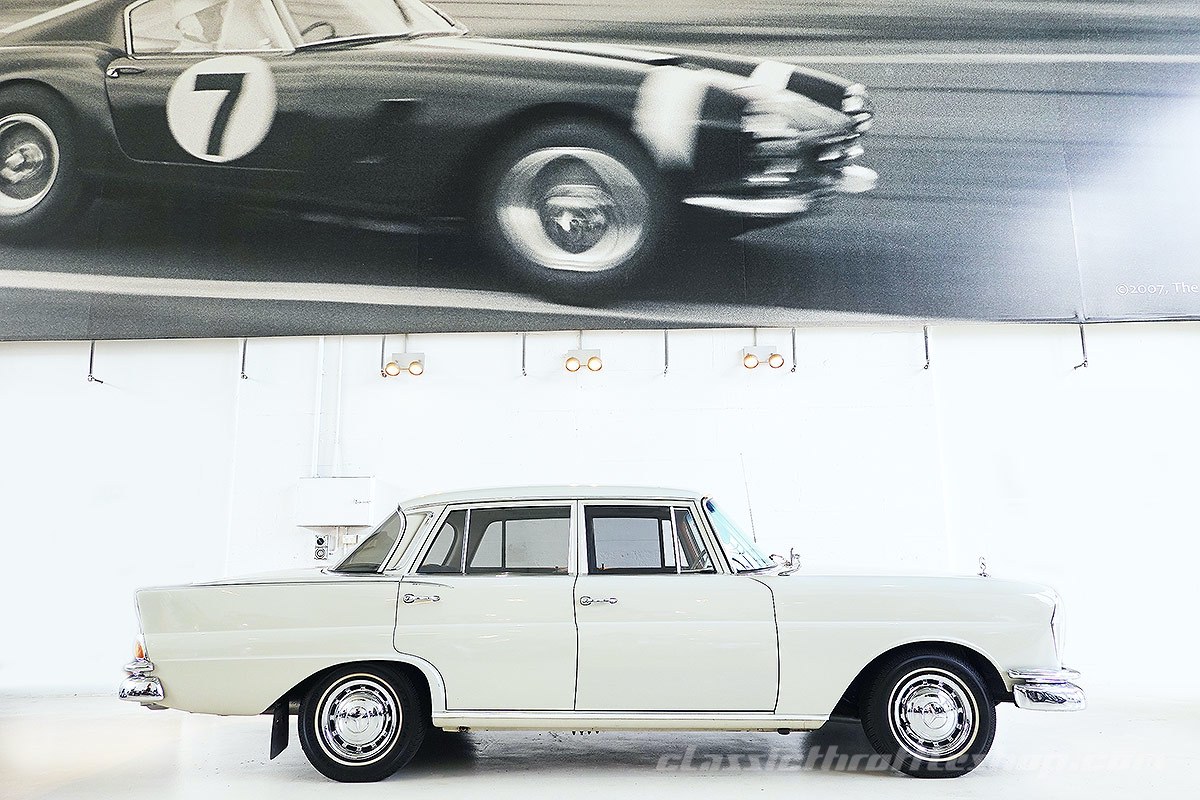 Presented here is a very smart 1961 220SE, manual, with air conditioning, which is one of the finest example of the model in Australia. It’s a German-built car (not Australian-assembled as some were), sold new in Australia – factory RHD. It has the 2.2 litre, fuel-injected 6 cylinder motor, which is well-known for reliability and smoothness. These distinctive looking classics were comfortable and very well-built prestige cars which really popularised the Mercedes-Benz marque in Australia. Back in 1961 this Mercedes-Benz sold for almost three times the price of a new Holden.

This car has been in local Perth collections for the past several years, having been with one of these collections for 15 years. The car has been restored by previous owners, the long term recent past owner having had mostly mechanical work done while he owned the car, and bodywork and interior by the owner before. A couple of years ago the brakes were redone and a new set of smart-looking white sidewall tyres fitted. The current owner has upgraded the interior of the car with items such as having most of the woodwork refinished and the steering wheel and gearshift repainted. He has also had the air conditioning system upgraded and made fully functional. Few of this model have air conditioning and it’s a true benefit to all round usability.

The car has the handbook and original service book, but nothing else until the paperwork from three owners ago, when much of the mechanical work was completed. There are bills for an engine rebuild and new clutch among other items. Most of the recent work has been done by a leading Perth specialist in older Mercedes-Benz cars.

The 220 SE has proven to be reliable and enjoyable to use. It has seen light use for at least two decades, has always been garaged and pampered, just taken on weekend runs and the occasional display.

It is fitted with chrome hubcaps instead of painted (an option in-period which suits it well) and an aftermarket, radio-cassette unit is fitted. As you can see from the accompanying photographs, the paintwork is excellent as are the panels and external hardware and trim. The interior is particularly impressive. The seats and interior woodwork are excellent condition as is all the internal hardware. Interestingly it has inertia reel seatbelts, but the old clasp-type catches, in keeping with the era of the car.

The extensive chrome work is all very good with the exception (if you were really looking for something to pick) of some parts of the bumper chrome being a bit thin. There’s a small quantity of new parts to be provided with the car including new door and boot rubber seals, yet to be fitted. It’s clear a fortune has been spent restoring this car and that it’s well-sorted. It would be fair to describe this car as the best W111 ‘Finny’ or ‘Heckflosse’ in WA. The photos will give you a good idea of what a great example this car is.

These are a lovely to drive model, with a strong following worldwide. The active, nation-wide branches of the Mercedes-Benz Car Club offer a lot for owners of such cars. This car represents a lot of car for the money and certainly far less than the cost of restoring one to this condition.
Click to access the login or register cheese
Send this to a friend