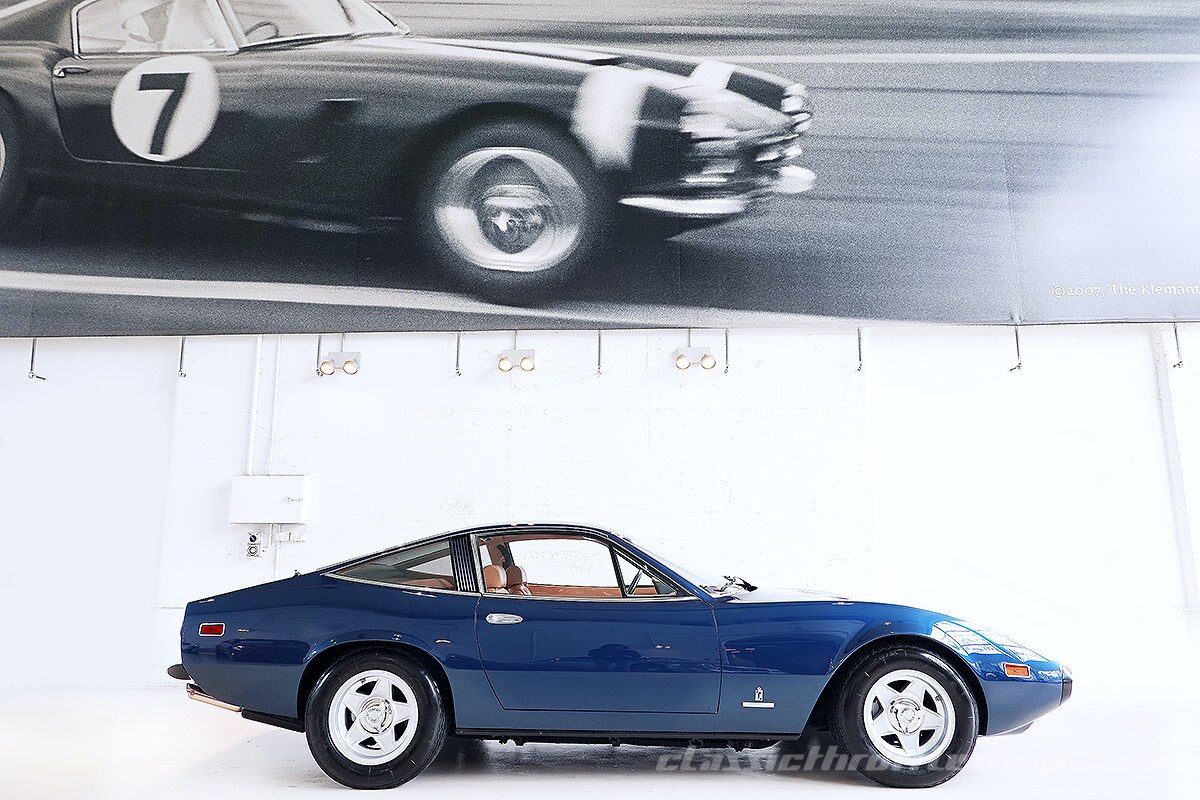 A short-lived model, beautifully elegant and low key in design first shown at the Geneva Motor Show in 1971, the curvaceous Ferrari 365 GTC4 is a refined Grand Tourer built for soaking up hundreds of miles at high speed.

Its design is closely based on that of the legendary Daytona; and the two cars are even more closely related when it comes to technology with the GTC4 nosing in front for many Ferrari Tifosi.

Under the masterfully sculpted Pininfarina body sits the chassis and running gear of the fabled GTB4 Daytona, along with an identical 4.4 litre Colombo V12 engine, with four overhead camshafts, plus a 5-speed manual transmission a driver could never grow tired of shifting with.

In its March, 2014 article Classic Driver wrote “The Daytona, with its elongated front end, was never really a curvaceously good-looking car. The GTC4 is, however, both better to look at and more fun to drive.”

Building on its predecessor, the 365 GTC4 offers ZF power steering, air conditioning, electric windows, power brakes, Koni self-levelling suspension and a clutch that doesn’t double as a “Thigh Master” to outstrip its predecessor.

And, because its production spanned just 18 months between ’71 and ‘72 with only 500 cars produced worldwide, the 356 GTC/4 was built in less than one-third of the quantity of its forerunner, giving it the edge in rarity too.

The 365 GTC4 also occupies a special place today as one of the last front-engined V12 sports cars of Maranello's classical progression from 1947 into the mid-1970s with a reputation for being the best driving V12 Ferrari to leave Maranello.

The car offered is a 1972 365 GTC4, originally delivered to USA and then imported into Australia in 2013. In 2015 the classic was a subject of a masterful and zero expense spared ground-up restoration undertaken by AutoRestorations, New Zealand.

Flown from Sydney, Australia to Christchurch, New Zealand, artisans AutoRestorations were chosen to complete the works because of their international standing having won 16 Pebble Beach Concours d’Elegance awards over the past 30 years.

Acting on the precise instructions of their client – an old hand at Italian car restoration, this 365 GTC4 was stripped and rebuilt, now presenting in the extraordinary period combination of Medio Azzurro over Tan leather.

The exterior presents with the same pragmatic approach. The depth of finish to the paintwork is second to none, the precise panel alignment lends near-perfect black lines across the entirety of the car, the engine bay is finished to factory specification right down to the small rubber ties that pair ignition leads and original tyre pressure decals and the hard-to-find, original Cromodora knock-off alloys fitted with period correct Michelin XWX tyres are present too. All small tell-tale signs indicative of a detailed and methodically prepared restoration.

Accompanying the car are the original manuals held within the correct leather wallet, the original tool-kit and keys.

Defining the performance of this car is to say there is a mountain of torque out of each and every corner and blinding acceleration on straight away, paired with an aural indulgence listening to the rhythm of the camshafts' lobes only produced by classic Ferrari. A welcomed break from the status quo of over-engineered contemporary exhaust noise.

Often considered the Driver’s alternative to a Daytona this 365 GTC4 has been restored to an internationally recognised high standard making it arguably the finest in the country to ogle and drive.

Sparingly used but maintained carefully and exercised regularly since its restoration this excellently well prepared and ready to drive 365 GTC4 offers a an incredibly rare opportunity to own, drive and invest in one of Ferrari’s finest.
Click to access the login or register cheese
Send this to a friend