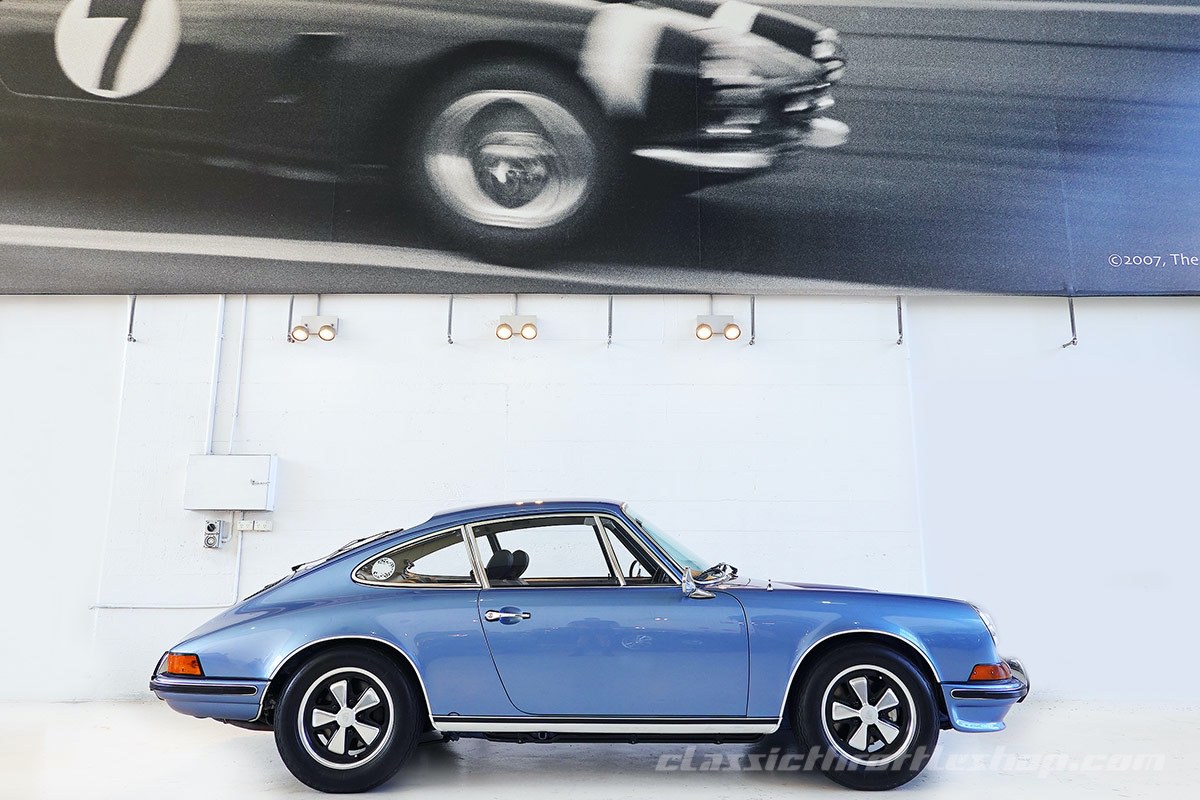 For 1972, all Porsche 911 variants received the 2.4-litre engine upgrade, by which time the 911 S featured the stronger Type 915 five-speed gearbox and 6"x15" Fuchs alloy wheels as standard.

Porsche had already tried, successfully, a 2.4 litre engine in endurance racing, the stretch being achieved by lengthening the stroke. But the impetus for the larger unit's introduction came from the USA's ever more stringent emissions laws.

Not sold in the USA, keeping total worldwide production to just 1,420 cars, the 911S produced a very healthy 190hp, some 40 horsepower more than was on offer to American customers.

The most obvious external change from the earlier 2.2-litre models was the addition of an areo pack with a small chin spoiler adopted to improve high-speed stability.

For the 1974 model year, production switched to the 2.7-litre model, which was the first 911 to incorporate the large impact-absorbing bumpers disliked by many purists, for whom the '2.4' is the last original 911 shape and therefor all the more collectible.

These improvements coupled with Porsche's total domination of the World Sportscar Championship and Steve McQueen's iconic endorsement in the film, 'Le Mans', this generation of 911 can do no wrong.

Offered here is perhaps one of the most special cars we’ve had the opportunity to bring to market. An Australian delivered 1973 2.4 Porsche 911 S Coupé delivered new to a Doctor by Scuderia Veloce Motors Porsche, Sydney in June of 1973.

Exotic sports cars imported into Australia have always attracted huge duties, so this right-hand-drive Porsche 911 S Coupé would have been extremely expensive; not surprisingly, that kept sales numbers low making this car 1 of just 9 to reach our shores.

Cherished by discerning owners, the chronological history of which is detailed within its extensive history file, this 911 S underwent a comprehensive and world-class restoration between 1994-2001.

The masterful bodywork and interior re-trimming was undertaken by Warren Gunning of Pacific Reproductions and the entire mechanical re-build was executed by Ian Hamilton of Autohaus Hamilton. All completed to exacting factory standards producing one of the finest examples in the world, and a well-regarded car amongst local classic Porsche specialists.

Subsequent maintenance had this 911 well looked after at Australia's leading Porsche specialists, in both Autohaus Hamilton and Cavaco Motors, the most recent service including fluids and filters and a general check over completed just 30 miles ago in preparation for the sale.

Complete ownership records are on file, and the car also comes with its Porsche Certificate of Authenticity, driver's manual and log-book pack, period Becker Mexico stereo fitted, both keys and an extensive folio of receipts.

Not only resplendent in Gemini Blue Metallic, and impeccably presented, the drive of this exceptional car is absolutely on the button.

Turn the key, fire up the fabled 2.4 litre engine with its signature air-cooled whirl and right out of the gate, the balance of the pedal feel, direct steering that offers so much feedback and the eager acceleration with such a linear torque curve that defines a 911 urges you to simply get out and drive.

So tightly held and so rarely offered to market this rare 1973 2.4 Porsche 911 S Coupé with its superb provenance and impeccable condition makes it a very savvy addition to any collection and/or garage.
Click to access the login or register cheese
Back
Send this to a friend