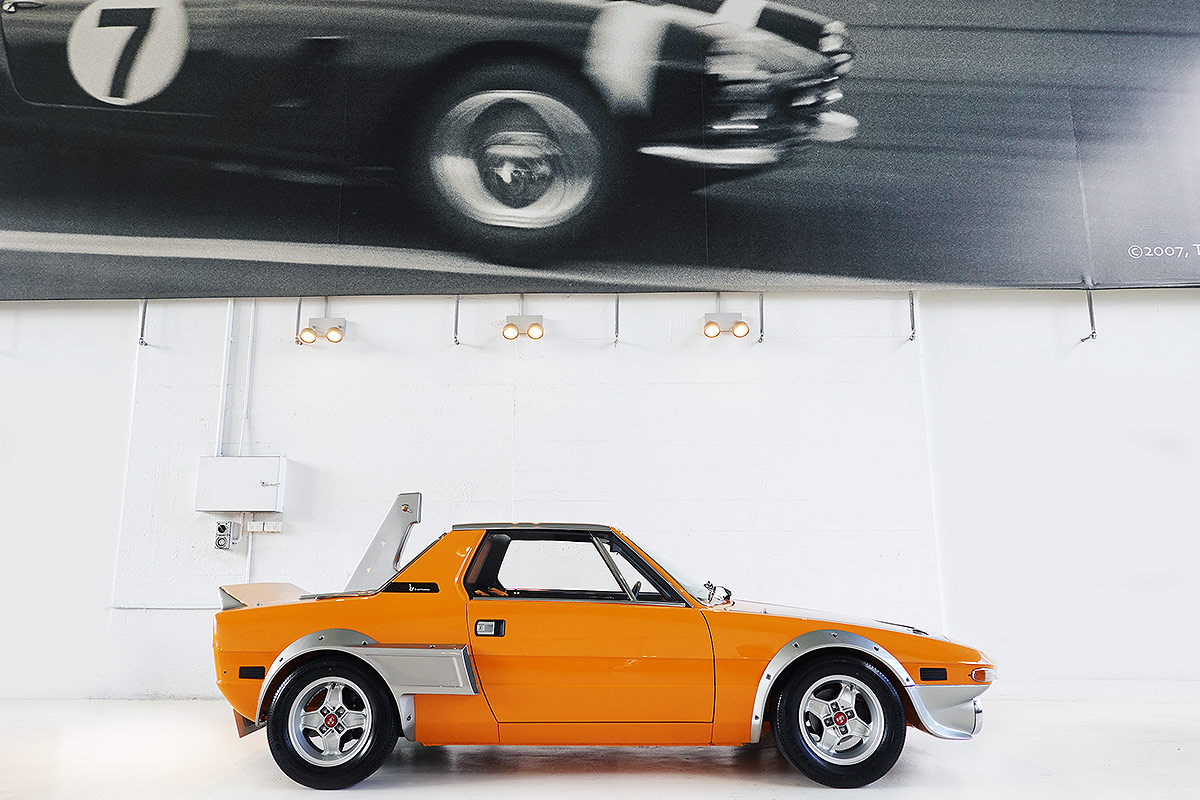 The Story of the Bertone X1/9 Stradale Prototype

• A rare opportunity to own a one off factory prototype

• Expertly restored to the highest standard with incredible attention to detail

• Powered by a competition derived 2.0 Twin Cam engine with over 200bhp

The origins of this special car have a very interesting story and it all began in 1974, when Bertone and Abarth decided to produce a fast sports car that was suitable for road and rally events.

Bertone and Abarth selected Mario Colucci as their chief engineer for this project. Colucci had a very close connection with Abarth working on many projects from the 1950s to the early 1970s.

Within 4 months they set about designing and building the car. What they came up with was the 1974 Abarth X1/9 Stradale prototype. To construct the X1/9 Stradale, Bertone chose to use the spare lightweight body shell they produced 6 months earlier when making the three X1/9 Prototipo race cars.

To significantly reduce weight on the shell, sections of the steel front boot floor were replaced with sheet Alloy. In addition, access to the engine bay was through the fire wall behind passenger and the glass rear window was replaced with Perspex.

Improvement to the cars handling was achieved by stiffening the body with a pair of large diameter tubes above each door opening and fitting a fibre glass roof that is solidly fixed to the car.

The bespoke minimalist interior included a special instrument cluster, produced and housed in a 1mm thick fiberglass dashboard. The alloy console was created with a unique heater control panel with switches and completed with a small Abarth badge and cigarette lighter. It’s interesting to see the effort that was made to maintain visual aesthetics without compromising on weight. For example, on closer inspection of the glove box you will find it is non-functioning.

All other interior panels were made of alloy. The centre tunnel has a large gated gear shift which is well needed when shifting between gears, especially with its racing bred 5 speed “dog box”.

The doors are made with special lightweight steel frames strengthened by many swaged holes and wrapped with lightweight aluminium door skins. To keep the weight down in the doors it was decided that no winding mechanisms for the windows would be used. Instead, a large round wing nut is used to manually fix the window in place. To open the door from the inside of the car, there is just a round ring attached to a cord to unlock it.

The interior is completed with a pair of superb Bertone tube frame bucket seats, trimmed in period correct Alcantara. All finished off with an original factory Abarth racing steering wheel and rare Abarth horn button.

Under the front bonnet there is a large alloy fuel tank with two air intakes in the nose of the car that feed air into the cockpit. The front bonnet is made of fibre glass with an inner fibre glass frame housing two large vents on top of the bonnet to let the air from the radiator out. The bonnet has special alloy forged hinges, quick release bonnet latches and special alloy bonnet prop.

The car features a special nose panel that carries a rare Abarth nose badge, unique to this Stradale X/19 and with the fixed head lights under alloy head light top covers, distinctive front spoiler with large 7’’ driving lights fitted down low, give the car a purposeful and almost menacing look. Think Jaws approaching in your rear view mirror.

When looking into the engine bay you are confronted with a spectacular looking Abarth powerplant, comprising of a large 2000 twin cam motor, an 8 valve cylinder head, dome mesh trumpets on twin 44 IDF down draft Weber carburettors. The carburettors are mounted onto a handmade intake manifold complete with an adjustable altitude bar used for rally events in the Alps. The engine is complete with a 4 into 2 Abarth exhaust header which flows into a fabulous Abarth muffler with a stinger outlet.

The engine is mounted to an Abarth 5 speed transaxle with close ratio gear set with dog engagement (no synchros) and limited slip diff centre.

With a small engine bay, Colucci went to great troubles to fit the engine and gearbox. There were significant modifications made to the engine bay and body shell including the creation of special mounting points and handmade mounts. To help the car handle this bigger power unit, the rear strut towers were heavily braced with tubing. The engine lid is made of lightweight fiberglass with a duck tail and a unique Bertone snorkel. The engine lid is held up by a light weight alloy tube and held down by a pair of quick release bonnet latches.

The suspension front and rear were strengthened, brakes modified competition spec and sway bars fitted front and rear. Once Bertone, Abarth and Colucci had finished the project they worked with Georgio Pianta, an Abarth works driver, to carry out testing of the car. After 1,012 kms of testing they achieved getting the car ready for production.

At this point they decided to approach Fiat Motor Company where they presented the 1974 X/19 Stradale Prototype to see if they would fund the project to produce 300 – 500 cars. Fiat declined and did not proceed with the venture. The Stradale was put into storage by Abarth for approximately four years, before it was sold to Alfred Cosentino, who purchased it with the help of his friend Mario Colucci. When the factory sold it, they provided an Abarth factory original invoice, special Italian build certificate and original TO -M46464 number plates.

There is a photo taken at the Abarth factory showing this number plate on the car in 1974. There are also shipping papers from Abarth to Alfred Cosentino documenting the purchase of the car. Amazingly, all these items are still with the car today. The second owner, a prominent Abarth collector, purchased the car from Alfred Cosentino in 2008, and in that time an extensive restoration has been undertaken to preserve the car to its original finish as it left the factory.

Prior to the completion of the restoration by current owner, the car had only ever been driven by Georgio Pianta and Alfred Cosentino. Since its restoration, the car has now travelled close to 800 kms. The current owner describes the experience of driving the car as simply spectacular. “The sound of the engine with hot cams and stinger exhaust is awesome and the engine roars with fantastic acceleration. It delivers one hell of a memorable drive”. As with all Abarth cars, weight was a factor and this is evident here with the car weighing 720 kg and producing over 200 bhp!

As a Prototype, one off car by Bertone, and with its history involving Carlo Abarth and Mario Colucci, the Abarth X1/9 Stradale is truly a unique and special car.
Click to access the login or register cheese
Back
Send this to a friend