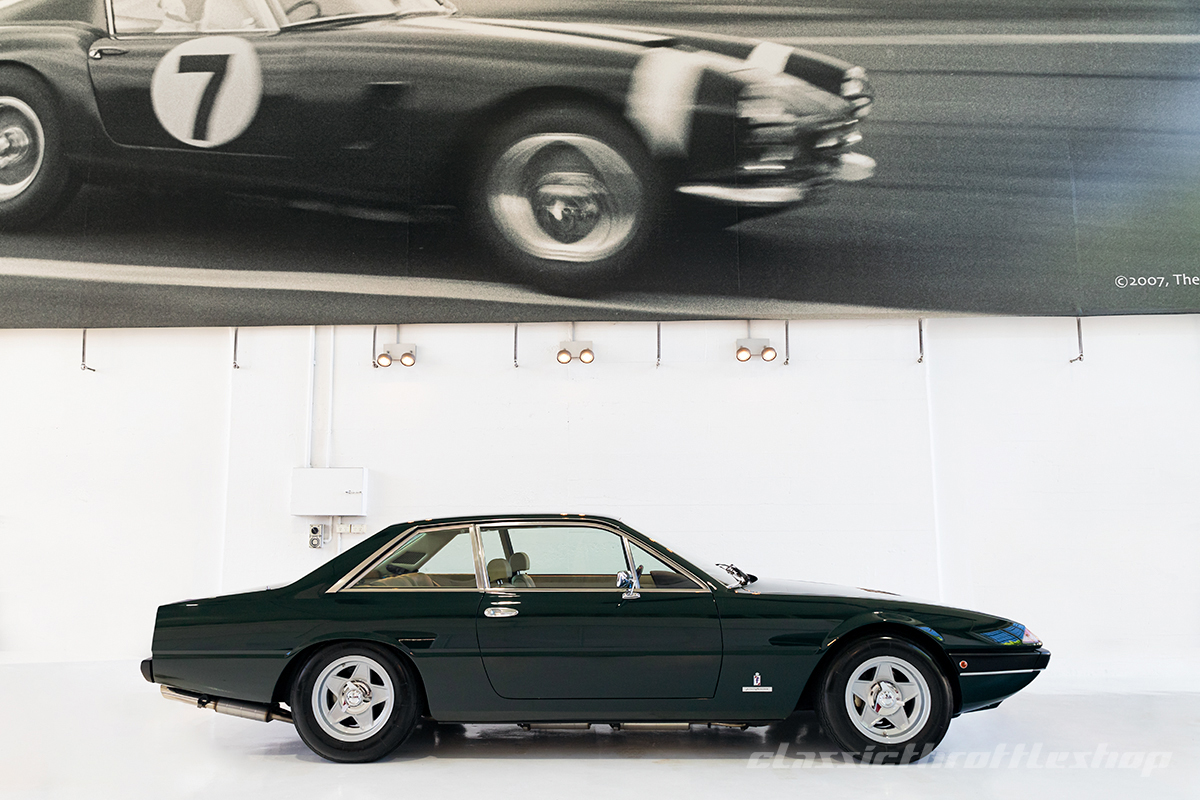 In period, the car was well regarded though, the oil crisis of the 1970′s made it somewhat difficult to sell leading to the small numbers remaining in circulation today keeping interest and prices ever buoyant. The incredibly rare car offered here is an Australian delivered, 1975 Ferrari 365 GT4 2+2 in its correct Verde Seabird over Beige leather trim presented in exquisite and original over all condition.

Sold new in August of 1975, this cars early ownership was transferred from a famous Sydney based socialite in 1987 to the long-term ownership of a well-regarded Ferrari collector in Port Melbourne, becoming stablemates with a Miura, Daytona and Testarossa at the time.

The result delivered a world class 365 GT4 2+2 and one of, if not the finest 365 GT4 2+2 in the county. The engine, transmission and air conditioning system were stripped and rebuilt by Prancing Horse Motors, the brakes, suspension and engine tuning executed by Terzini Motore, the paintwork with its brilliant depth of finish was completed by Perfect Reflection Restorations and the interior, engine bay insulation and stunning boot carpeting masterfully installed by Blackmans.

The car was only enjoyed for a short period before the owner was unable to drive but meticulously kept records document the largest portion of this cars cherished life. The most recent works carried out in August of last year including a reconditioning of all suspension componentry and major service in preparation to pass the car to its next custodian.

With power-steering, air conditioning and power brakes, the drive is also sensational with power delivered so linearly throughout the rev range. Gear changes are accurate, the pedal feel is well weighted and in just a short stint behind the original MOMO wheel, you get the sense that this car is just as Ferrari intended. Also to top of its perfected provenance, the current owner recently had the car thoroughly inspected, tuned and serviced throughout by his preferred engineering shop. Everything from full carburetor rebuild and balance to readjusting the window mechanisms to ensure swift smooth operation.

Accompanied by a large history folio including receipts for the entire restoration, ownership history and service receipts from 1987 onwards, the original tools and keys this Australian delivered car with interesting provenance and a growing demand around the world is a savvy acquisition. A model that is a true milestone in Ferrari’s storied history and one that thoroughly deserves its classic status, the availability of world class 365 GT4 2+2 is an opportunity not to be missed.