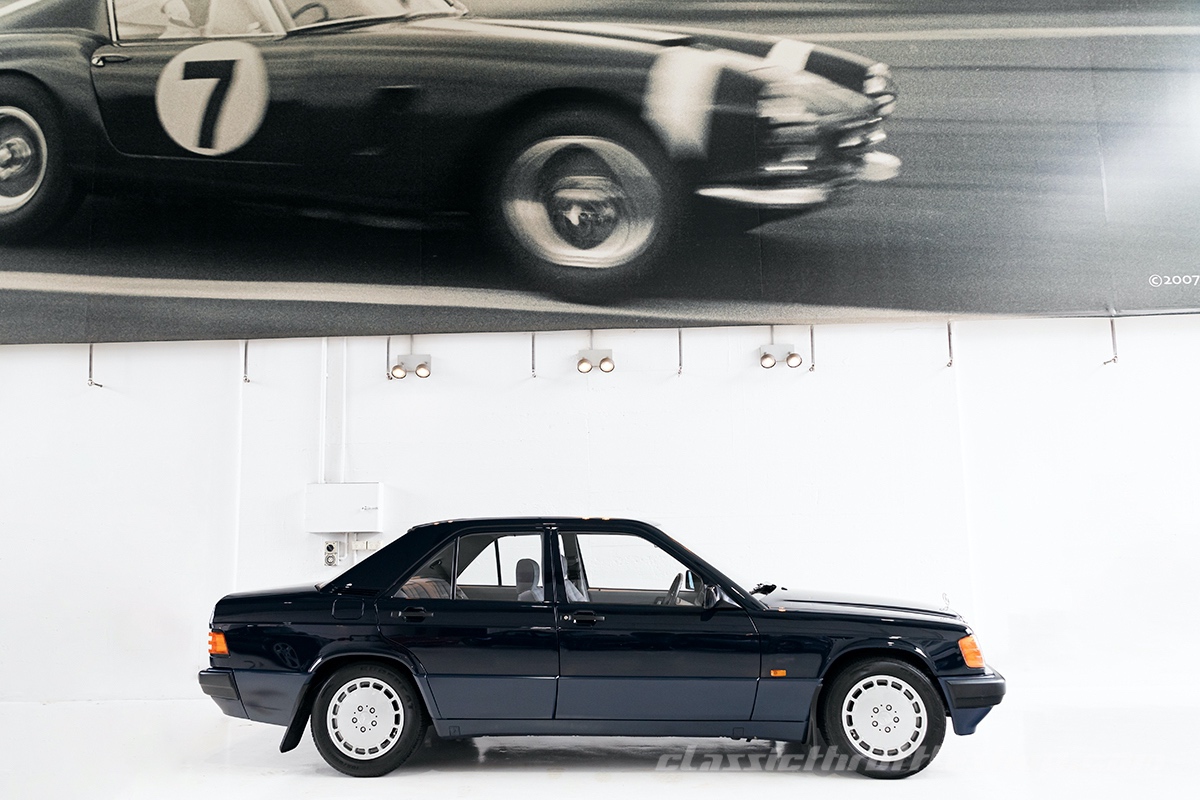 Mercedes-Benz cars in Australia are perceived as being way out of reach of mere mortals with a mortgage and three kids to put through school.

But in 1991 the company was forced to respond to strong marketing pressures from BMW with its cheaper entry level 318i and Audi with its 80 Series. While the brand had a powerful prestige aura primarily due to its S-Class models, its product range was relatively narrow and its entry price-point for an automatic car was high.

So rather than sit on their “MB Tex”, Mercedes-Benz turned the market on its head in bold move that sent shockwaves through the car industry, the result was the introduction of a unique and very affordable Mercedes model.

The 180E Limited Edition four-door sedan was priced to come in under the luxury tax threshold, at that time set around $45,000, which meant not only was it more attainable, but it could also be fully depreciated.

The bold move came from some rathe clever thinking. The 180E Limited Edition was actually a 190E with reduced equipment levels and a new badge so as not to alienate the loyal customers who had paid much more for their 190E. Whilst the Limited Edition lost tinted glass, ABS brakes, electric windows and some other small trim items, it was an instant success, challenged BMW for the top spot and history was written.

The 180E is therefore an historically important car for the brand in Australia, as it brought a whole new generation of buyers into the fold who could only have dreamed of Mercedes ownership previously. It also effectively paved the way for the very popular C-Class which followed in 1994, and which remains the top-seller in its segment to this day...and now about to move into its fifth generation, the W206.

Offered here we have what would have to be one of Australia’s best kept Mercedes-Benz 180E. Finished in Dark Blue & Rio Blue Two-Tone exterior with Grey MB Classic Fabric, it has travelled a mere 31,000 kms since rolling off the Centenary Motors Mercedes-Benz Showroom in 1993. Power steering and air-conditioning remained as did the passenger power mirror. Set apart from most 180E examples, this 180E features the dealer fitment of electric windows, Eurovox radio and the optional 15” Alloy Wheels (with the steel wheels accompanying the car also).

Step inside this amazingly presented classic and you will be transported back to the 90’s. The interior design is unique with a simple but ergonomically efficient dash design and the traditional gated gearshift. The ignition key is on the dash to the left of the steering column and the indicator stalk, unlike many European cars, is on the right side.

Behind the wheel, as with all Mercedes-Benz models, the ride and handling are outstanding. Ample power and cruise-a-bility with a smooth 4 Speed Automatic transmission is both comfortable and sporty.

Complete with all original bookwork, it has enjoyed a full service history through the Mercedes-Benz service network, with the most recent service completed by G Brothers Mercedes in September this year and ready to be enjoyed.

The Bruno Sacco-designed W201 has always been regarded as an outstanding driver's car, with a taut, sporty chassis and enjoyable driver feedback through the precise power steering. This car still impresses with that trademark crispness, and instantly puts a smile on the face of any Mercedes-Benz enthusiast. Mercedes-Benz cars are built to a standard of quality and durability envied by other makers. Don’t miss this opportunity to become one of the cool Mercedes set with you own piece of Australian Benz history.
Click to access the login or register cheese
Send this to a friend