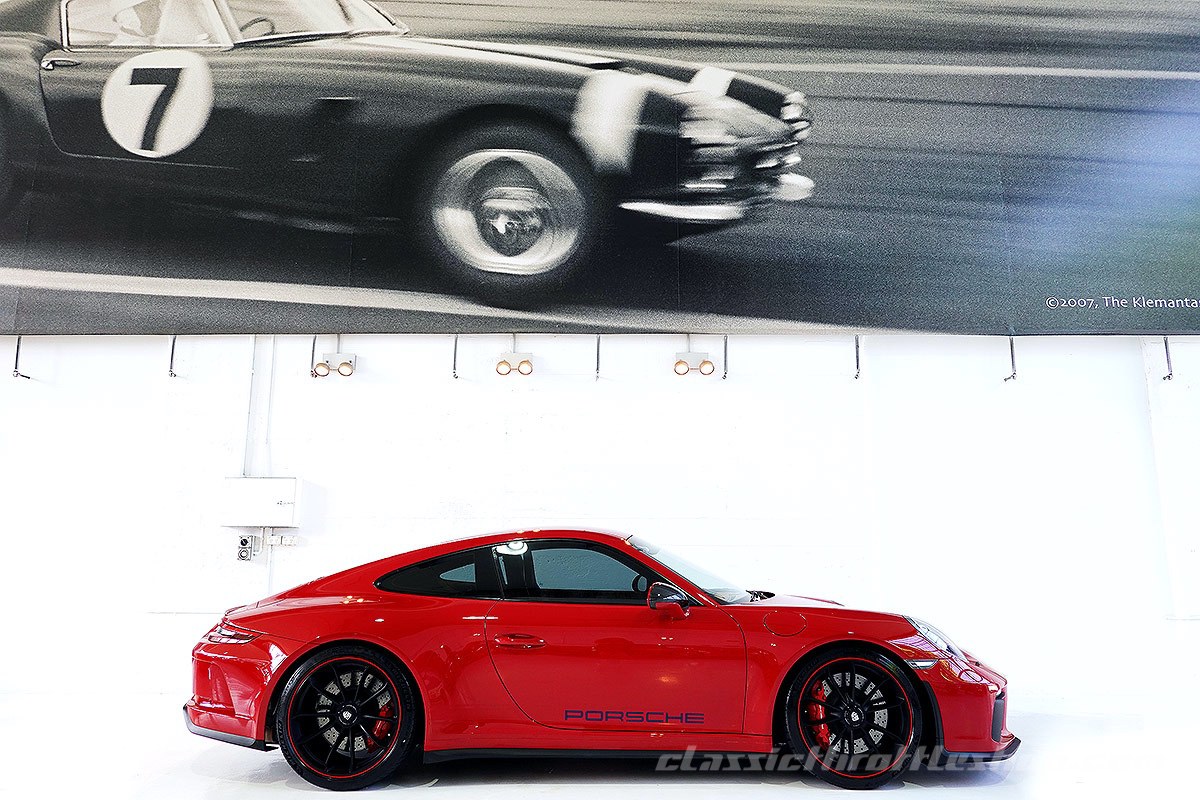 The GT3 Touring is Porsches way of channelling the original analogue 911s, the name “ Touring” originally derived from the 1973 2.7 Carrera RS, meaning it was essentially the RS fitted with creature comforts for the open road.

This Porsche 991 GT3 Touring is a pristine example of the high-performance sports car, presented in an attractive factory Carmine red and with low kilometres from new. Under the rear engine cover is the 362 kilowatt naturally aspirated 4.0 litre flat six, which will scream all the way to 9,000rpm and drives the rear wheels via a six-speed manual transmission. The odometer shows just 14,593 kilometres.

Based on the ‘standard’ GT3, the GT3 Touring is a more subtle affair than its boisterous stablemate. Gone is the substantial rear wing usually found on the GT3, with a deployable spoiler taking its place. The Touring was also only available with a manual transmission, and its interior is trimmed in black leather.

Delivered new to Porsche Centre Gold Cost in January 2019 this right-hand drive 991.2-generation GT3 Touring was specified with Carmine red paintwork which is to believed the only one in Australia, and rides on black alloy wheels. It was acquired by the seller brand new.

The car’s shapely bodywork remains in truly fantastic condition, The distinctive Carmine red paintwork is in excellent condition, with a smooth and glossy appearance around the car and no marks or blemishes to speak of. This is accented by black ‘Porsche’ decals which run along the car’s flanks.

Moving inside, this GT3 Touring’s cabin presents extremely well indeed. Also Clad in black leather with corduroy style cloth centre sections, with red stitches, the dashboard, door cards and steering wheel are all in great shape, and the glossy carbon-fibre inlays on the dashboard and door trims are unmarked.

• Leather interior with stitching in red

This impressive modern sports car will be accompanied by all its original documents and accessories, including its owner’s manual and service book up to date and a factory extended warranty until 2024.

This Porsche 991 GT3 Touring is a beautifully presented and thoughtfully specified example of the coveted contemporary sports car, which combines sleek styling with the GT3’s screaming 4.0 litre flat six. While it would undoubtedly make an excellent addition to any collection, this is a Porsche that truly deserves to be driven, and it is sure to delight its next owner every time they put it through its paces.
Click to access the login or register cheese
Send this to a friend