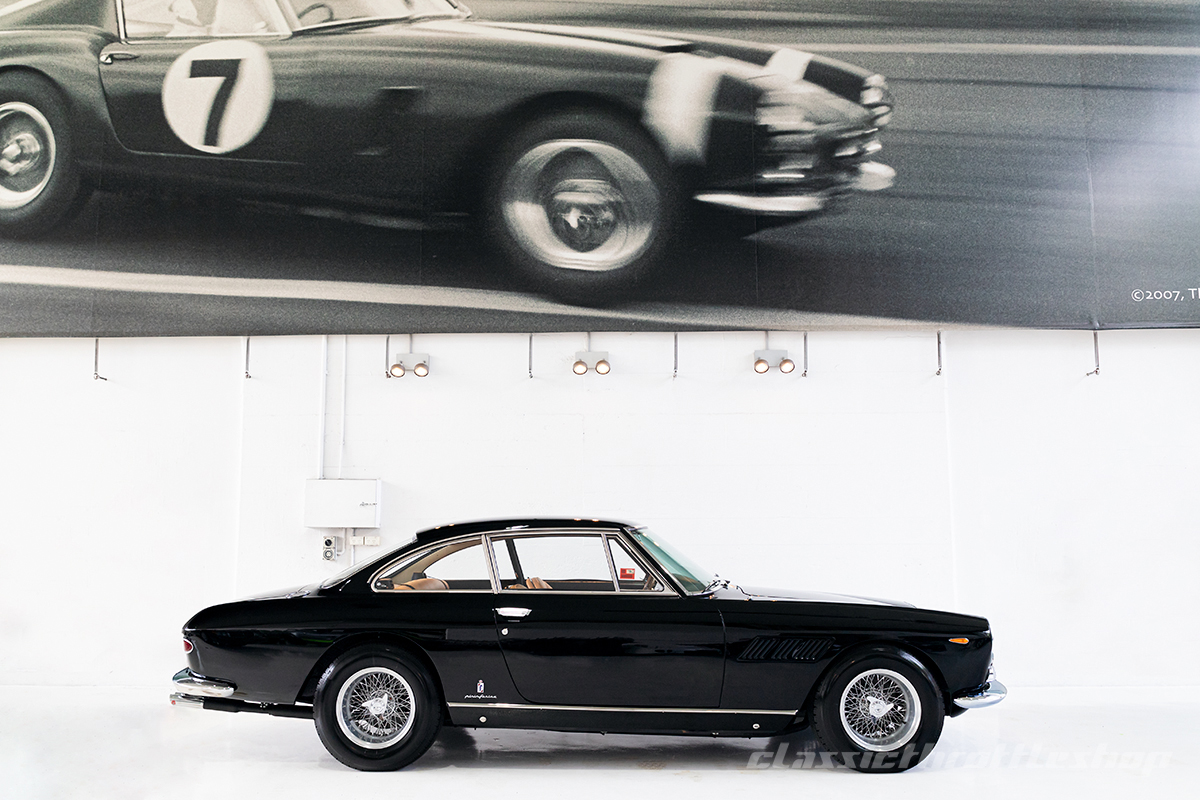 Penned by Pininfarina the Ferrari 330 GT 2+2, made its introduction at the Brussels Salon in January, 1964 during the era known in Europe as 'la dolce vita'.

Commonly referred to as the Series 1, Pininfarina was once again entrusted with the styling, and their vision of Ferrari's evolution included some daring design elements. A sharper nose and tail, a wide grille, and the espousal of a characteristic quad headlight arrangement.

The 330 GT was introduced as a replacement for the 250 GTE which had been Ferrari’s first series production model to offer a four-seat cockpit arrangement. Produced alongside the sultry 275 GTB and exclusive 500 Superfast; the 330 GT was designed as a more comfortable and less demanding vehicle to drive. The Tipo 571 chassis frame was in many ways a close development of the frame used for the outgoing 250 GTE. A number of important revisions were made including a 50mm wheelbase extension and the inclusion of adjustable Koni shock absorbers.

The Tipo 209 V12 engine was developed from the enormously impressive Colombo line that dated back to 1947; the 330 GT engine with triple Weber 40DCZ/6 carburettors has a displacement of 3967cc which helped equate to a very healthy 300bhp at 6600rpm through the 4-speed manual gearbox. This formula propelled the 330 GT from zero to sixty in just 6.3 seconds and onto a top speed of 150mph.

With a total production run of just 125 of the later series 1 cars, these 330GT’s are not only revered for their race-bred yet very versatile drive, they're also incredibly rare and very collectable, after all the 330 GT 2+2 S1 was John Lennon's first car.

The incredible example offered is a LHD car delivered new into the USA state of Florida in 1965. 4 owners later, the GT went on a journey to the southern hemisphere to New Zealand in 1997. After spending some years in NZ, the classic Italian GT then travelled across the Tasman Sea to Australia in 2005 where the last owner championed a total restoration with one of the countries leading classic car restorers. With only winning trophies in mind, they ensured that the quality and pedigree of the build was nothing short of perfect.

The result, first in the ‘’modern thoroughbred’’ category at Motorclassica in 2011.

The exacting detail of the restoration means that today, this car presents in excellent condition. Tell-tale signs like the well preserved timber dash and chrome instrumentation, original radio and rich leather upholstery show how well the car has been maintained since.

Outside, the original chrome bumpers and fittings, rich black paintwork and arrow straight bodywork give the car an elegant road presence, even the correct Borrani wire knock-off wheels are still on the car.

Only very few of these early 330 GT's exist still today, many having been used as donors for replicas of the GT250 SWB or Testarossa racing Ferraris.

Excellently prepared, this special Ferrari 330 GT 2+2 Series 1 offers an exciting opportunity to own and invest in a landmark slice of Ferrari history.
Click to access the login or register cheese
Back
Send this to a friend