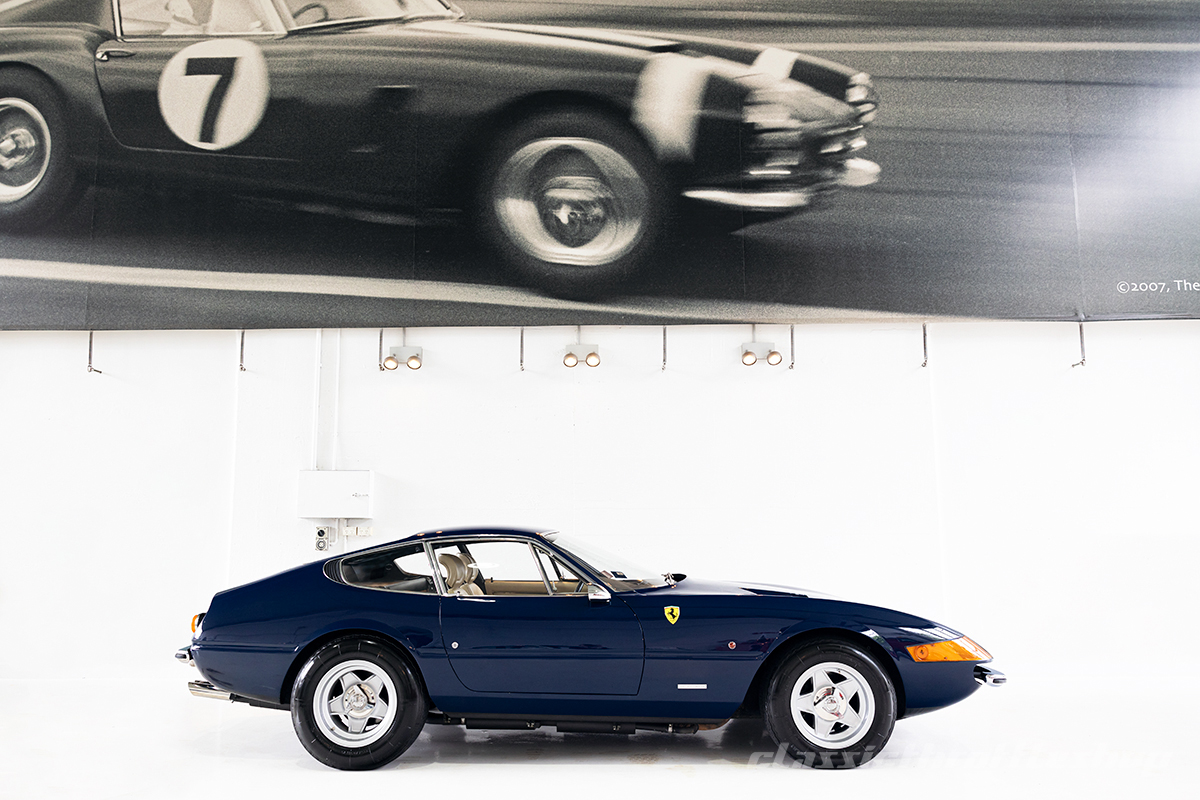 The last classic-era, front engine, V12 Ferrari was the 365 GTB/4. The press nicknamed it the Daytona much to the disdain of Enzo Ferrari. It first appeared at the 1968 Paris Motor Show and its 170 mph top speed became a supercar benchmark.

The 365 took off from where the 275 GTB/4 left off. It used a 4.4 litre V12 quad-cam upfront with four-wheel disc brakes, independent suspension and a rear-mounted transaxle balance out the front/rear weight ratio.

The car’s styling came from design Lionardi Fioavanti. He describes the process: “I worked for seven days without taking a break and then showed my ideas to Sergio Pininfarina. He liked them, as did Enzo Ferrari, and that’s how it came about.” ¹ In 2008, Fioravanti describes the car as “the best I ever done and the one I am most proudest of.” Continuing, “there isn’t much I would change.” ¹

Mr Cotter’s ownership stretched 42 years while keeping it in an impeccable state. This Daytona has always been very popular and respected Ferrari in the community, one which always comes up in conversations at any motoring event.

After 4 decades, it was time to eventually sell and to the current owner who for the past 10 years, pestered Mr Cotter until he gave in.

When purchasing the Daytona, the car’s inspection was performed by no other than Mr John Allen who was the Melbourne Ferrari expert and delivered this Daytona new plus many of the old Ferraris back in the Day 60s and 70s. Largely impressed, Mr John Allen’s inspection came back with only bright comments of the condition and originality that the classic supercar still contained.

During the last seven years the current owner has continued the legacy in keeping this car in total original condition. The car has been regularly serviced by Zagame Ferrari in Melbourne and over the past 7 years, several items like a new clutch, new exhaust and multiple other normal servicing requirements have been performed.

Testament of the highest quality, this Daytona was awarded 1st outright for the preservation class at the 2019 Motor Classica.

To complete this perfect classic, it comes with the Daytona leather wallet filled with correct original delivery books showing all the right stampings plus the original tool roll and Ferrari briefcase with correct tool pieces and spares. The car is fitted with the wider more profound Daytona wheels with the original wheels being kept safe and coming with the car.

This special Australian delivered right-hand drive Ferrari Daytona would have to be the best and cleanest most original Daytona you could possibly purchase in Australia.
Click to access the login or register cheese
Back
Send this to a friend