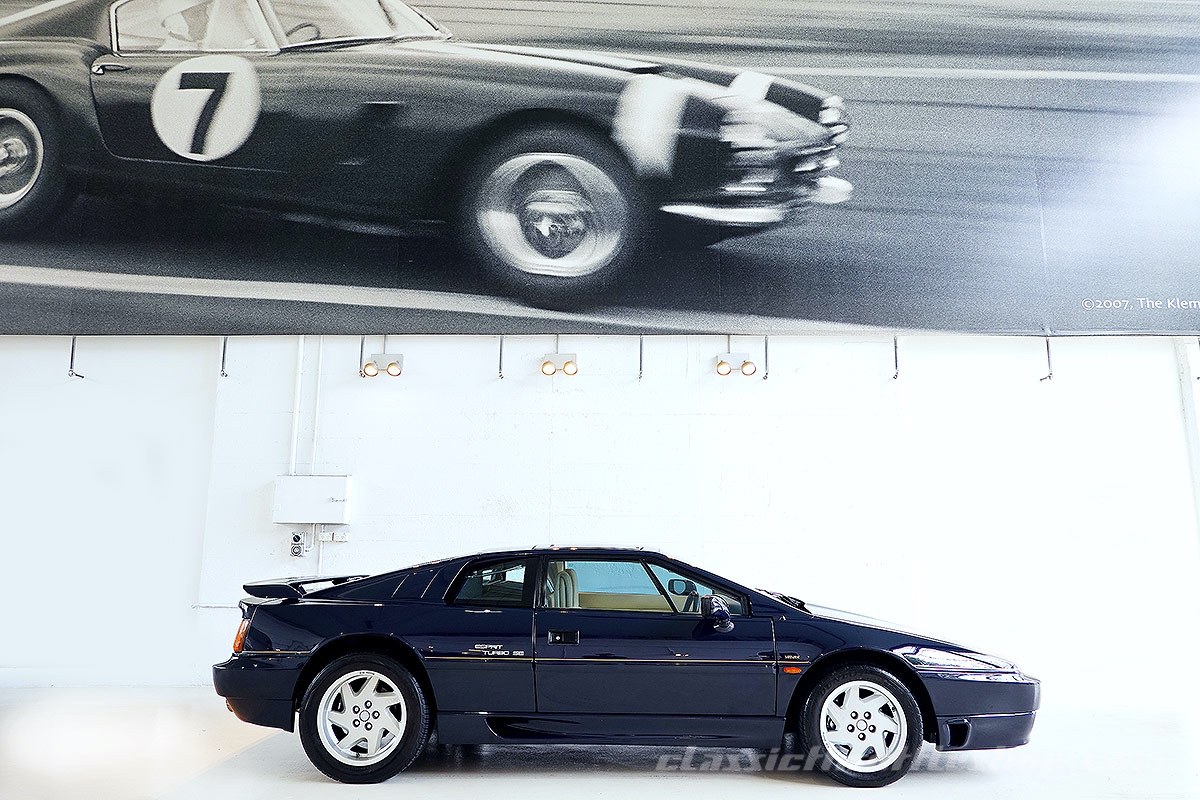 The Lotus Esprit Turbo SE (Special Equipment) was launched in May of 1989 with a total production run of just 560 units worldwide.

The fastest, most luxuriously appointed and, naturally, most expensive Esprit to date, the SE was designed to outperform the Porsche 911 Carrera.

Devouring the 0-100 km/h sprint in just 4.7 seconds with its signature turbo flutter and race-proven handling, the Esprit definitely delivers on that promise.

Features the SE offers over a standard Esprit include twin oil coolers, more efficient aerodynamics and larger/lighter alloys but what really sets this car apart is the addition of a water-to-air intercooler, which Lotus refers to as a "Chargecooler"- increasing power from 228hp to a whopping 280hp.

Corresponding to the original Owners’ manual, this very original 1991 Lotus Esprit Turbo was delivered new by Chapman Automotive, Melbourne in October of 1992 optioned in Oxford Blue over a two-tone Magnolia and Black leather interior.

Meticulously maintained with zero expense spared, this totally original Esprit SE benefitted from a major service replacing all drive and air-conditioning belts and all four discs with new pads both front and rear in 2013 as well as a new clutch and refurbished turbocharger in 2000 with just 11,000 kms recorded since.

The exterior of this car is second to none. The original Oxford Blue paintwork is in fantastic condition with small details like the correct gold pinstripe, correct headlights, Esprit badges, grill and front and rear spoilers in out of the box condition.

Inside, the hand stitched leather seats still cocoon the driver and passenger perfectly and all original dash fittings present with great clarity. Low slung, you can’t help but feel the racing heritage built into the Esprit, just sitting inside feels like 260 kmh barrelling down the Hunaudières straight.

Accompanying the car is the original Owners handbook, maintenance manuals and a host of service receipts dating back to the 1990’s. A turn-key and very rare Lotus Esprit SE accompanied by a meticulous service history, this Blue-Chip classic would make for the perfect addition to any garage or established collection. Such good value for money.

There is nothing else quite like the drive of one of these classic Esprit’s and this range topping SE is something quite special.
Click to access the login or register cheese
Back
Send this to a friend