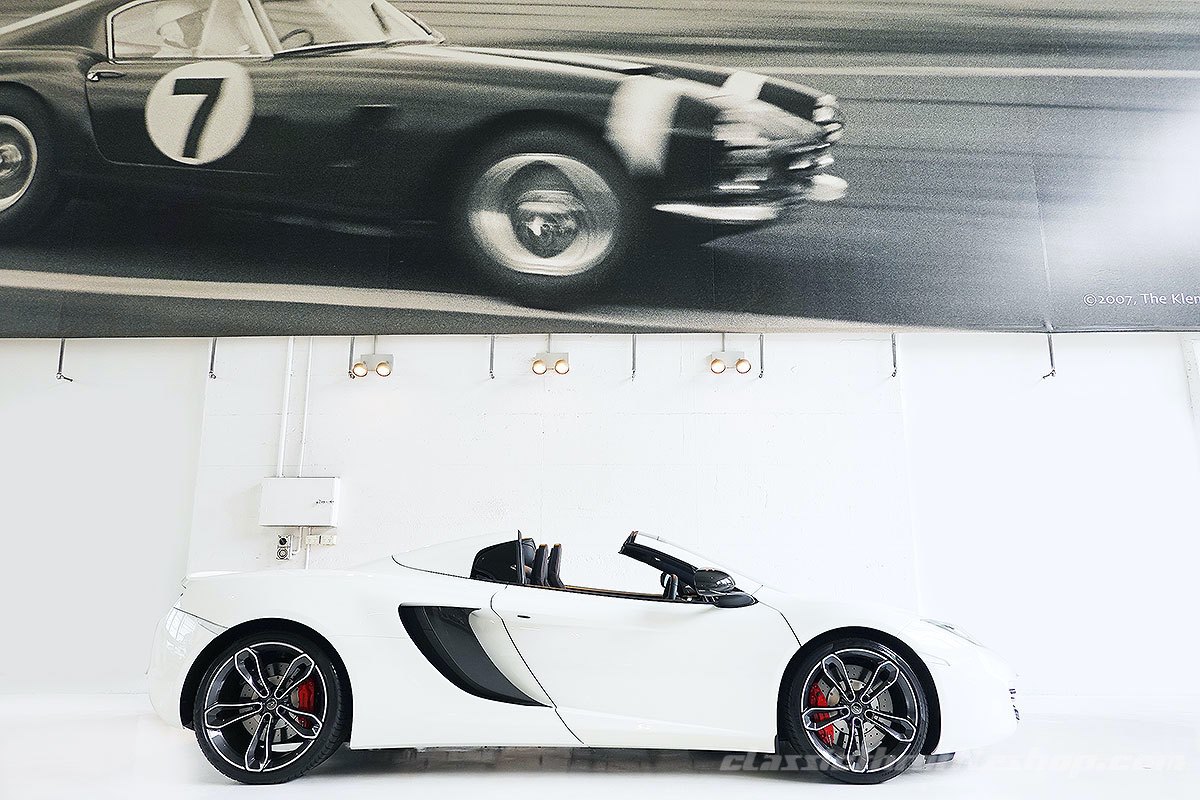 Constructed like no other Supercar, the McLaren 12C rose from Formula 1 Championship Heritage and developed by a world-class team of designers and engineers with hands-on Grand Prix experience.

Having astonished the world with its debut supercar of 1992 - the iconic, Le Mans-winning F1 - McLaren re-established itself at the head of the exclusive '200mph' club with the MP4-12C. Publicly unveiled in September 2009 and under the stylist of Frank Stephenson, the mid-engine MP4-12C commenced manufacture at McLaren's new state-of-the-art factory at Woking in mid-2011, just after production of the Mercedes-Benz SLR McLaren model had ceased.

Like its F1 and SLR predecessors, the MP4-12C used a carbon-fibre 'MonoCell' body tub, albeit one that now took considerably less time to produce thanks to advances in composites manufacturing technology. This time the occupants' two seats were arranged conventionally side by side, unlike the F1's unusual three-abreast layout, which placed the driver in the centre, though the use of dihedral doors maintained a familial link with the F1.

Unlike the McLaren F1, McLaren decided to develop its own engine for the 12C. The rights to an Indy Car V8 racing engine were acquired from Tom Walkinshaw Racing, and with local engineering assistance, this was transformed into a 3.8 litre twin-turbocharged unit suitable for a road car. Manufactured by Ricardo, the M838T engine produced 620hp with 80% of its maximum torque available as low as 2,000 revs. Power was transmitted via a dual-clutch 'seamless shift' seven-speed semi-automatic gearbox - technology developed in Formula 1 - that permitted pre-selection of the next gear. Another Formula 1 spin-off was the 'brake steer' technology, which applies the inside rear wheel's brake during hard cornering to counter the effects of understeer.

All modern supercars are designed with racetrack performance as a priority, but with the 12C, McLaren pulled off the difficult trick of endowing it with a ride quality approaching that of a luxury saloon. Reviews confirmed that McLaren had achieved what they set out to do with their new car. Evo Magazine stated: "It's faster than a Ferrari 458 Italia, has more useable performance, rides better, has more mechanical grip and is much, much more useable."

This is largely due to the 12C's suspension which is remarkable for its ability to absorb bumps and maintain an eerie freedom from pitch and roll, regardless of whether you're on the freeway or a mountain pass. To reach the outer limits of the McLaren 12C's ability however, you might just need a circuit.

In 2012 the McLaren MP4-12C was voted 'Best Supercar' and overall 'Car of the Year' with the “Best Engine” award following a year later – just what you would expect from F1 geniuses.

The next instalment was an open top variant – the 12C Spider. Drawing in the same F1 inspired engineering, led to revolutionary innovations that make the 12C Spider one of the most potent supercars on the road and on the track.

While the mechanisms required to open, close and store the roof add weight and weight being the enemy of performance, engineers weren’t satisfied when they 50kg. so over an obsessive 6 month period, the trimmed of an additional 10kg, making it the lightest retractable hard top roof on the road and zero compromise on performance between it and it’s fixed roof stablemate.

As one of the very few 12C Spider variants delivered for Australia, its single ownership presents in excellent condition and with only 2,200kms and recent service, it is ready to be enjoyed.

Smooth, agile and with endless linear acceleration, the 12C delivers a drive of F1 proportions. This example would look at home in any garage or collection, poised to race you through winding weekend roads, breath excitement into your life and be part of the McLaren story.
Click to access the login or register cheese
Back
Send this to a friend