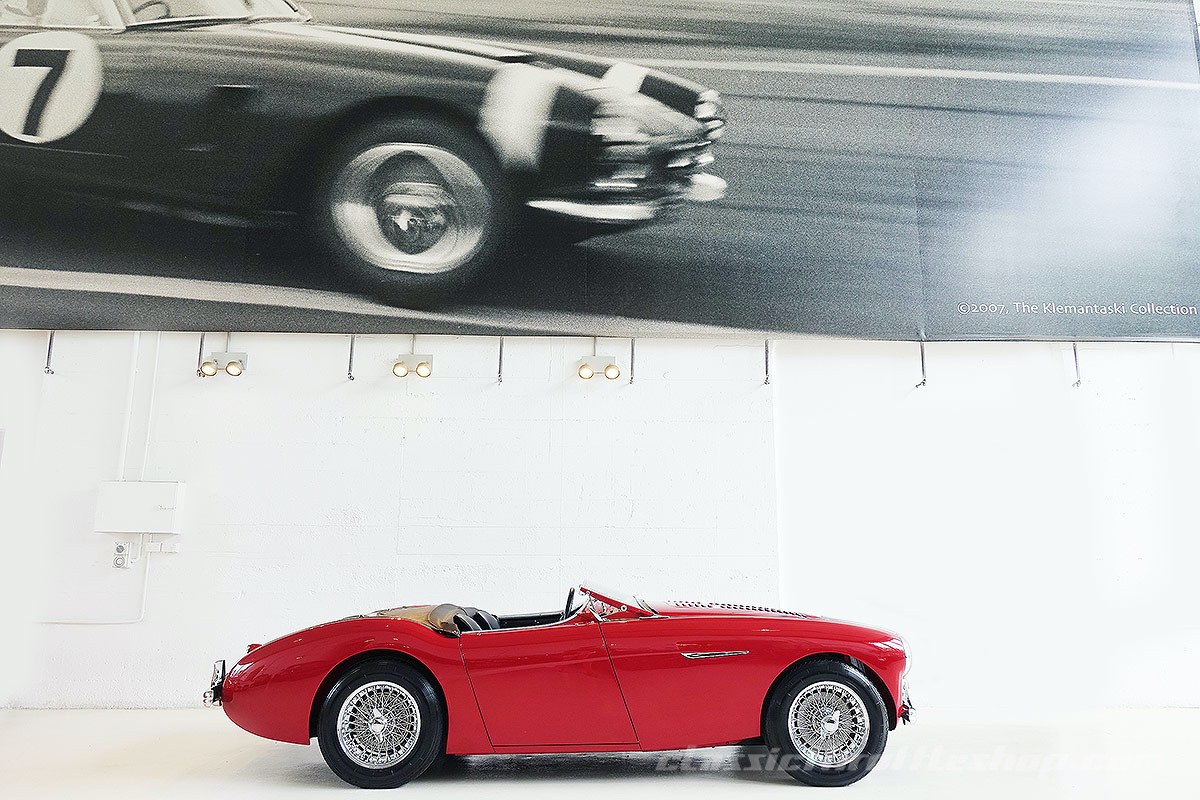 With nomenclature taken from its ability to reach 100mph the Austin Healey 100/4 is considered to deliver the most original and most pure driving experience of all the big Healey’s- agile, punchy and incredibly versatile.

With muscular styling, a tarmac tearing 90hp engine which racing historian Griffith Borgeson wrote "Such high torque at low engine speed is one of the competition assets of the Austin-Healey. Another is its durability", independent front suspension with live rear-axle and leaf-springs, lightweight steel construction, a racy lay-down windscreen and an engaging 3 speed manual transmission with overdrive the 100/4 had manufacturers like MG, Triumph and Jaguar scrambling to keep up.

The BN1 also fawent racing and in 1952 entered the 24hrs of Le Mans finishing in 12th and 14th places, an incredibly noteworthy achievement for what were essentially mildly modified road cars.

Available here is an Australian delivered Austin Healey 100/4 BN1, built on the 11 of February 1955 and sold new to Melbourne to a lady by the name Maude Letch whom was in relation to Charlie Letch a well-known motorcycle racer and Triumph motorcycle dealer.

This vehicle was ordered in Carmine Red over Red trim and featured factory options such as laminated windscreen, Miles-Per-Hour Speedometer and Dip Left Headlamps.

Known to have been fully restored in the 1990’s and winning many concours awards in 1998 & 1999 for “Best Road Car” awarded by Austin Healey Club Western Australia Concours D’Elegance this 100/4 has been fastidious preserved ever since.
Today the Healey still retains it’s 3-Speed gearbox, all-round drum-brakes and its corresponding engine and chassis number as per it’s British Motor Industry Heritage Trust Certificate and having received major mechanical work just recently by a local specialist, this BN1 runs and drives beautifully.
Not only does their sporty and muscular styling transcend generational tastes, the way they perform on–road and track is unrivalled by anything else, classic or modern.
It wouldn’t be a collection without one and at home in any garage, these user friendly early British roadsters make an excellent entry into classic car ownership.
Click to access the login or register cheese
Back
Send this to a friend