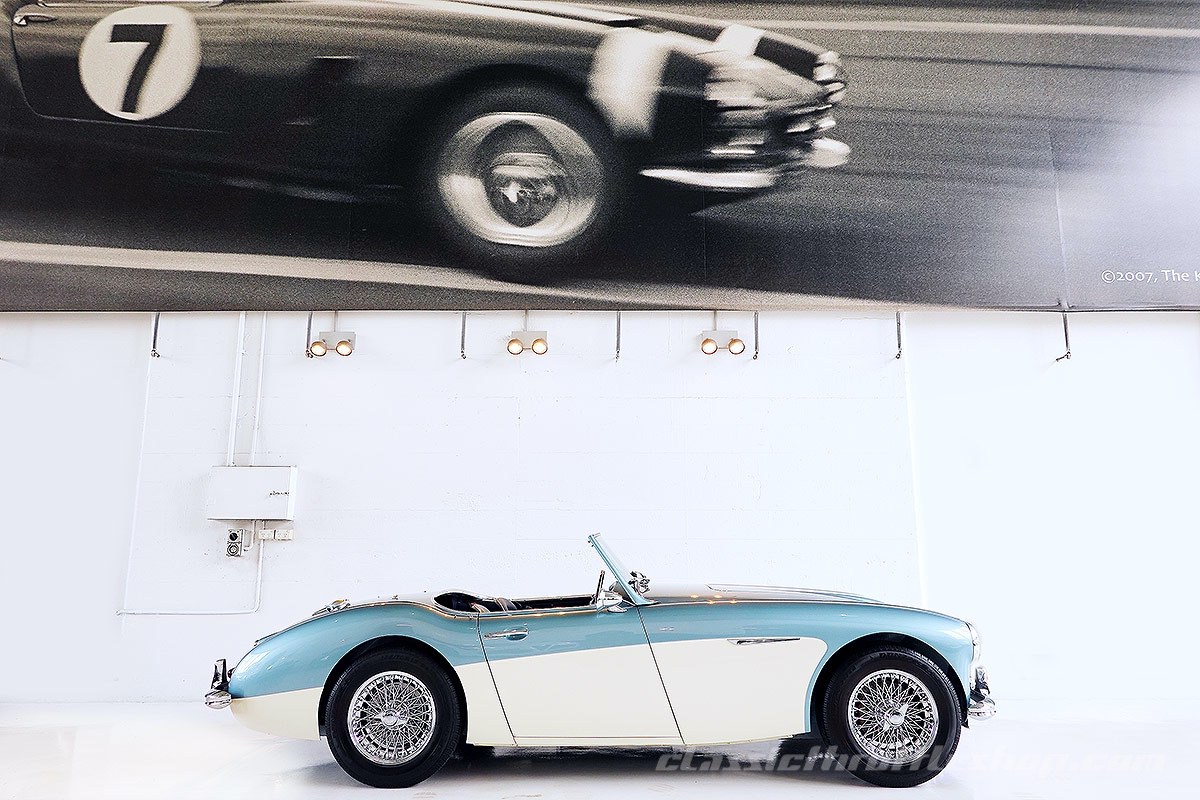 Introduced for 1956, the 100-6 represented the most step forward for the Big Healey’s development. Despite its success, sales of the original Austin-Healey 100 had begun to decline by the mid-1950’s and so the model was revamped as the ‘100-6’, BMC’s 2.6 litre C-series six replacing the original four-cylinder Austin Atlantic engine.

At the same time the wheelbase was lengthened from 7’6 to 7’8, which enabled the inclusion of two occasional seats in the rear of the BN4 variant. In 100-6 tune pushrod six produced 76 Kilowatt- 9 kilowatt more than its predecessor- though the inevitable weight gain meant that there was little if any improvement in performance, the car’s top speed remaining 165 kilometres or thereabouts. Although stylistically very similar to the preceding 100, the 100-6 was nevertheless easily distinguishable by its crinkle radiator grille and bonnet-top air intake.

In 1957 an improved six-port engine became available, and this 87 KW unit was fitted to all the newly introduced BN6 two-seater roadsters. Top speed improved to 178 km/h and 1.7 seconds was cut from 0-100 kilometres.

Available here is an originally Left-Hand Drive delivered new in America Austin Healey 100-6 two- seater built between the 30th of May and finished the 3rd of June 1958 and sold new to North America to a lady by the name of Mrs Brown.

Known to have been fully restored and converted in the early 2000’s by the renowned Healey Factory in Melbourne, this is evident through the large amount of paperwork in the history file.

Today the Healey still retains in his 4-speed gearbox, the engine and chassis number are corresponding to the British Motor Industry Heritage trust certificate and having received major mechanical work just recently by a local specialist in Melbourne, this BN6 runs and drives beautifully. Not only does their sporty and muscular styling transcend generational tastes, the way they perform on-road and track is unrivalled by anything else, classic or modern.

This Austin-Healey 100/6 is a delightful and useable classic British roadster, which benefits from a prior high-quality restoration from the Healey Factory and is still in very good order. The car is finished in a classic Healey colour scheme, the car is ready to be driven and would make an ideal mode of transport to any classic car show, or a stylish top-down cruiser on sunny weekends.
Click to access the login or register cheese
Back
Send this to a friend