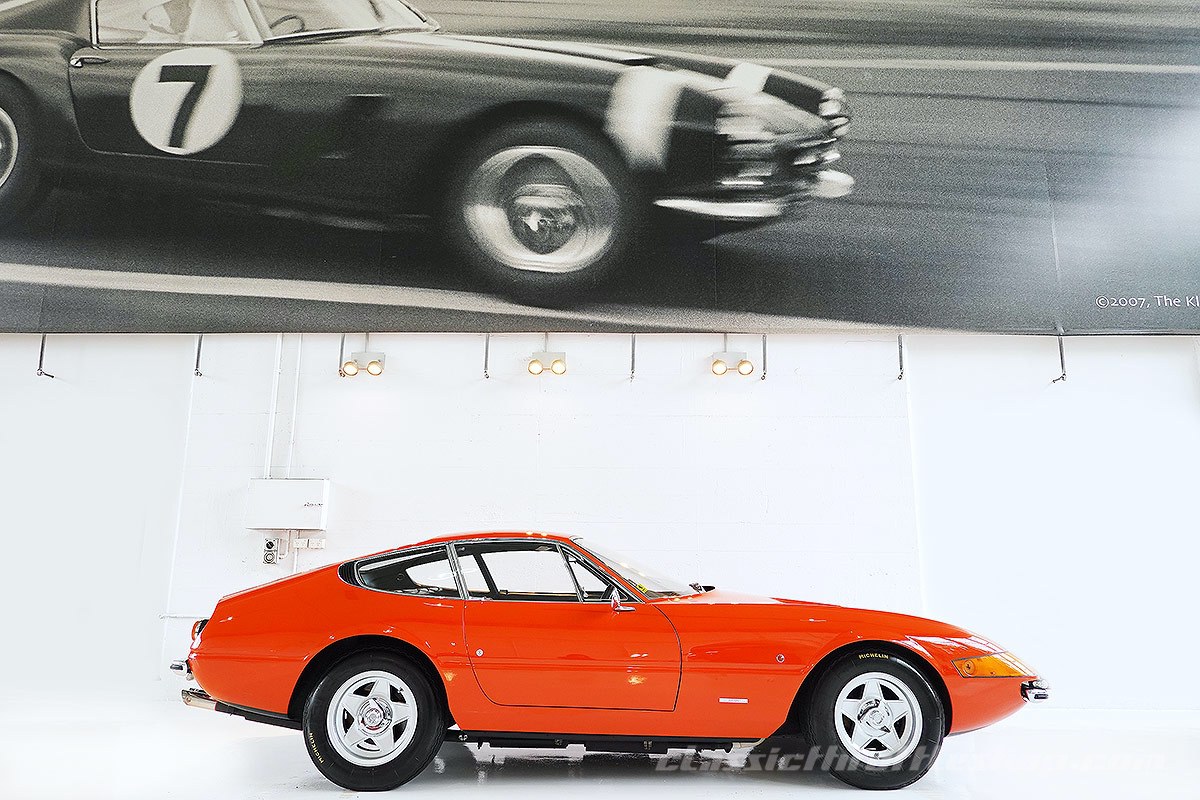 The Ferrari 365 GTB/4, better known as the Ferrari Daytona, was the last front engined V12 Ferrari before the switch to the mid-engined Berlinetta Boxer models. Introduced in 1968 at the Paris Motor Show, it replaced the 275 GTB/4.

The beautiful sharp-edged design was designed by Pininfarina and still looks fantastic today. Early Daytona’s featured fixed headlights behind an acrylic glass cover, these are the so-called and very rare “Plexiglass” cars, of which this example is one; these are the most coveted pure original designs highly valued by collectors and connoisseurs. This particular setup was completely abandoned in 1971 in favour of retractable pop-up twin headlights due to new safety regulations in the US. Leonardo Fioravanti, designer, interviewed on a TV car show had confirmed a popular rumour that it took him 7 days to design the Daytona.

The engine, known as the Tipo 251 and developed from the earlier Colombo V12 used in the 275GTB/4 was a 4,390cc DOHC V12 featuring six twin Weber carburettors. It produced 352bhp, which allowed the car to reach 174mph and 0-60mph in 5.4 seconds! The five speed manual transmission was mounted in the rear for optimal weight distribution (transaxle), and a four-wheel independent suspension featured wishbones and coil springs.

This special Ferrari Classiche certified Daytona, Chassis Number 13627, is one of the first of only 35 RHD plexiglass examples delivered in the UK and has been owned by much respected car collectors during its life. In 1970, Maranello Concessionaires delivered the car to Gerald Ronson CBE, Business tycoon and philanthropist, and the car has in total had only six owners during its privileged lifetime. Finished in its original stunning colour scheme of Rosso Dino over Black leather, the vehicle comes supplied with the original tool kit, handbooks, service book, drivers manual, Ferrari dealer listing and wallet. The original logbook is also supplied along with a well documented history including the original order form invoice plus the original Motorola radio is still fitted too.

This is a great opportunity for the discerning Ferrari collector to add this exceptional car Plexiglass Daytona with great provenance to their collection. Early inspection is highly recommended.
Click to access the login or register cheese
Send this to a friend