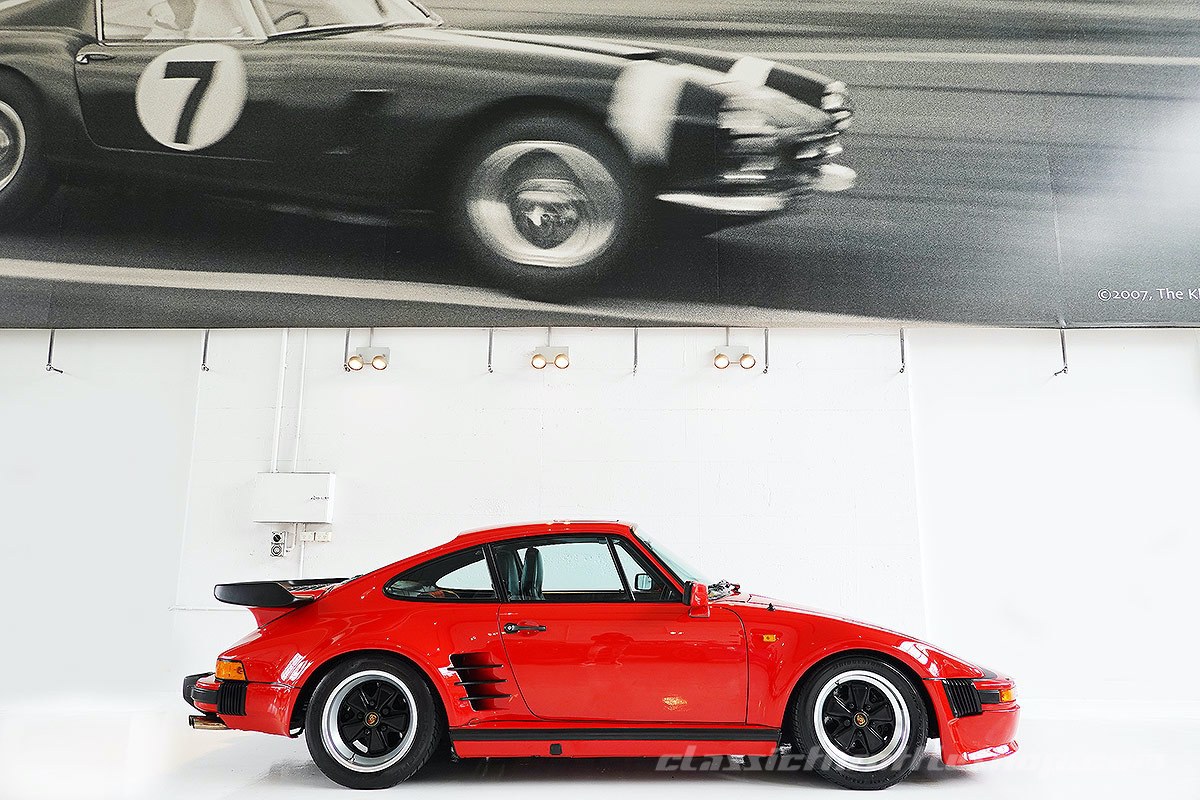 Initially designed as a homologation special in the spirit of the Carrera RS, the race-bred 911 Turbo became Porsche’s premium production model during the years from 1975 – 1989. From its motorsport dominance in virtually every form of international racing, the team at Weissach created something special.

Based on a systematic approach with the first production turbocharged sportscar, the world held its breath. The result wasn’t just a fast car, but the fastest and most powerful road car ever. Internally dubbed Type 930 (derived from its M930/50 3.0ltr engine), the 911 Turbo debuted at the Paris Motorshow in 1974, becoming the scene setter and the original story behind the 911 Turbo. The vehicles power and presence proved to be a sensation at debut. Ironically though, the ptototype show car that captured the world’s attention was built on a standard 911 S with radical body styling from Porsche Style that would resemble the up-and-coming 911 RSR 3.0. That car continued on the world tour and afterwards made its way to Australia.

Porsche importer Alan Hamilton had convinced the factory to fit an RSR 3.0ltr engine to the Turbo prototype in order for him to campaign the Australian Sportscar Championship and with that secured 6 production order 911 Turbo’s for the market – long before LHD production had commenced in volume – testimony to just how strong the Aussie relationship was with the factory.

When the production model arrived on our shores, it was nothing short of sensational. It was bold, without being over the top. Perfectly proportioned, just the right amount of exhaust note, and an aerodynamic “whale-tail” rear wing than not only added down and cooling to the engine compartment that would become the signature for all future Turbo models.

Adorned on almost all of our bedroom walls alongside its direct competition, the Testarossa and Countach, the 930 Turbo offered a whirring purring air-cooled flat-six-cylinder engine with single KKK turbocharger and Bosch electronic fuel injection. The impressive performance saw a need for independent front and rear suspension, ventilated and cross-drilled power disc brakes and the stronger 4-speed transaxle with widely spread ratios to be employed in place of the 5-speed from the 911. This resulted in a 0-100km/h in just 5.5 seconds (more than 90 km/h could be found in first gear) and a top speed of 260km/h. The world was hooked!

Between 1975 and 1985, with Australian production totalling just 196 units, the 911 Turbo saw a number of advancements and improvements. Larger wheels, larger rear spoiler with intercooler, an increase to 3.3ltrs, bigger brakes with cross drilled 4 piston callipers, all culminating in the final year for 911 Turbo in Australia with a 300hp powerhouse.

Ordered new through Scuderia Veloce by Pat Bourke in March 1985 in Guards Red with Tartan Trim, the transformation of the production 911 Turbo through the exclusive “Sonderwunsch Programm (Special Wishes)" for Bourke was nothing short of amazing. Customers of this program included many from oil-drenched Arab states who could indulge their every “wish” on the Porsche Model of their choice. However the biggest statement of all was to order your 911 Turbo from the factory with the Flachbau (Flatnose) modelled on the famous 935 racing models of the late 70’s.

By the time Bourke placed his order, less than 250 Flachbau’s had been built and only 50 of those in RHD. Exclusivity and performance all rolled into one – combinations that enabled the ultimate in your Porsche. Because these options were very labour intensive, they sold for 60% more than the standard, a significant number of additional cosmetic or mechanical items could be added – typically the SE 330hp kit. But being racing team owner, Bourke wanted more.

After completion, the Guards Red Rocket was sent to Porsche’s racing department at Weissach where its engine weas substantially modified and fitted with variable boost control and LED display to allow it to produce a whopping 450hp on full noise. At the same time a high performance clutch along with suspension and brake enhancements to match.

The result for Bourke was nothing short of spectacular and after taking Tourist delivery at the Porsche Factory, enjoyed some time with the car in Europe before Porsche shipped it back to OZ and the story of this legendary one of a kind 911 Turbo was complete.

With just 24,898kms since new and handled by CTS on two previous occasions from two prominent collectors, This 911 Turbo SE Flachbau has a very special place in history of the Shop. We are very proud to bring to market once again and find the next owner to carry on this remarkable legacy.

This is a THE opportunity for the serious Porsche collector to own not only a piece of Porsche history but a piece of Australian Porsche history that will continue to appreciate for many decades to come.
Click to access the login or register cheese
Back
Send this to a friend