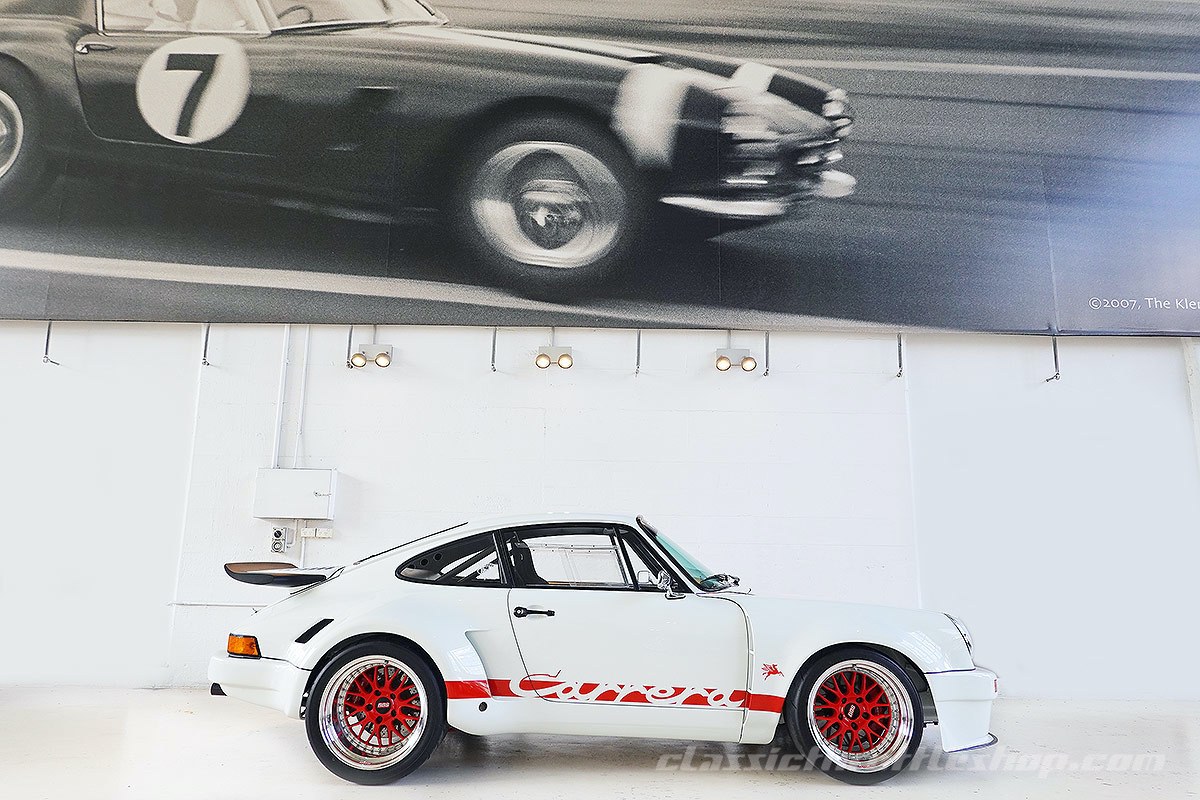 In 1973, the 2.8 litre Porsche 911 Carrera RSR would start the long-distance racing season in victorious fashion, winning the 24 Hours of Daytona in February with Peter Gregg and Hurley Haywood at the wheel.

By the end of May, the factory Martini Racing squad had added a famous triumph at the Targa Florio to the trophy cabinet before new regulations entered the room, forcing modifications that led to the building of a legend.

Typically, the team at Weissach managed to further reduce the weight from the already lightweight Carrera RS 2.7, while simultaneously increasing power without compromising reliability.

By using GRP panels and plastic side windows, and stripping out all but the most essential items of interior trim, the RSR barely tipped the scales at just 900 kg dry and for 1974, a new 3.0-liter engine with Bosch twin-spark ignition was employed, with a resultant power increase to 330hp with devastating effects on the competition.

Center-lock wheels, flared wheel arches, a front airdam, and the now iconic “tea-tray” spoiler gave the car an aggressive posture and more efficient aero-dynamics and handling capabilities and top speed was 270 km/h, with the 0-100 km/h sprint dealt with in just 5 seconds.

Overall, just 110 examples of the original RSR 3.0 were ever made and if you are offered one today, the price is well into seven-figures. Given this scarcity, the appeal of a recreation becomes obvious but not all are created equally.

The masterfully executed Porsche 911 3.0 RSR Replica offered here is a stunning tribute to one of the rarest, most successful Weissach models ever and is built on a genuine 1975 911.

Designed and built by classic Porsche specialists based in Melbourne in the early 1990’s, under the engine lid is an attitude filled 3.8 litre flat-six with a dry sump set-up taken from a Type 993 911.

Selected for its strength and reliability, this last of the air-cooled engines has been bored and stroked to produce 400hp and features RSR period-correct 50mm PMO carburettors and an MSD twin-spark ignition system mated to a period correct 915 5-speed manual transmission that shifts with rifle-like-accuracy.

The original 1975 Carrera body is fitted with GRP panels at the front and rear including the RSR flares plus polycarbonate windows (except the laminated windscreen) and a fuel cell beneath the bonnet with bonnet filler, just like the real McCoy.

Significant care was taken throughout the build to use components of the correct type for the RSR model, including high-grade McPherson struts, lower wishbones, coil springs over Bilstein shocks, reinforced shock towers and bespoke stabiliser bars front and rear.

Weighing just 1,100 kilograms and producing an enormous amount of power inside such a masterfully pieced together build, this RSR Replica is among the best in the country.

Resplendent in its flawless Grand Prix White with Guards Red decal, the attention to detail of this car is second to none and the drive is sensational. As you’d expect, the acceleration under heavy load is aggressive and rapid, the steering is so direct, pedal feel is well balanced and ovrerall, this 70’s supercar urges you to go faster.

Travelled just 1,000 kilometres since it was created, the majority of those kilometres only recently accrued as it was prepared for sale, this rare and well executed RSR homage must be experienced to be believed.

This car is sold with full NSW registration.
Click to access the login or register cheese
Back
Send this to a friend